The Gothic Quarter And Gaudi Museum

I wasn’t sure what to expect on my first full day of sightseeing in Barcelona.  It was the National Day of Catalonia, a day that memorializes the fall of Barcelona in the War of Spanish Succession in 1714.  It has become a symbol of the independence movement in Catalonia and has been marked by marches and protests as much as it is about celebrating Catalan patriotism.

As I made my way down to Placa de Catalunya there were already quite a few people out waving and wearing the flag of Catalonia. 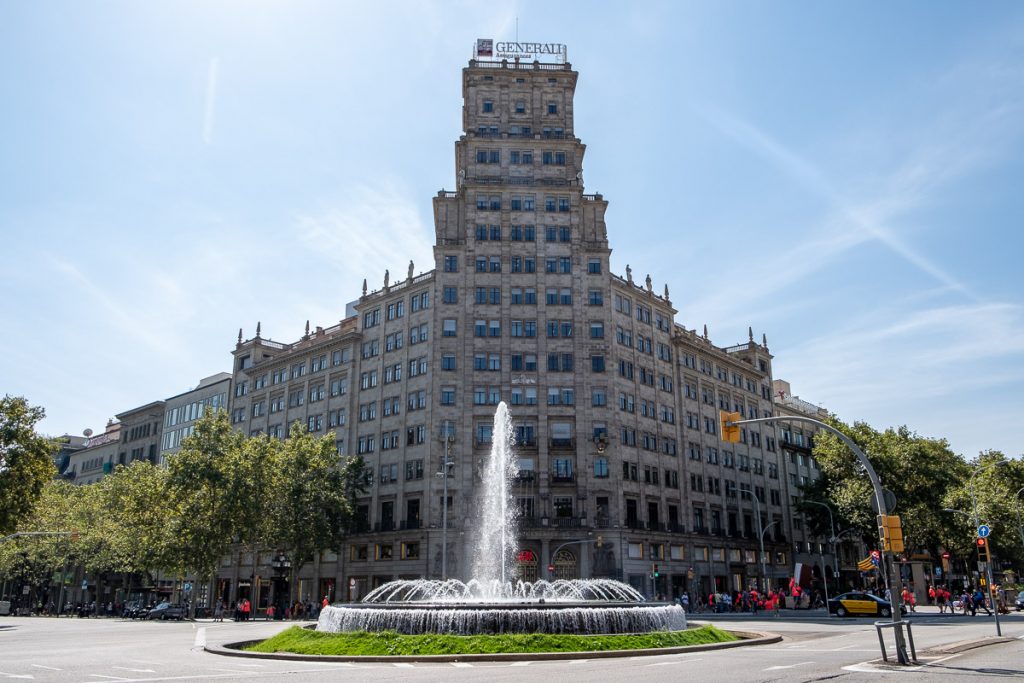 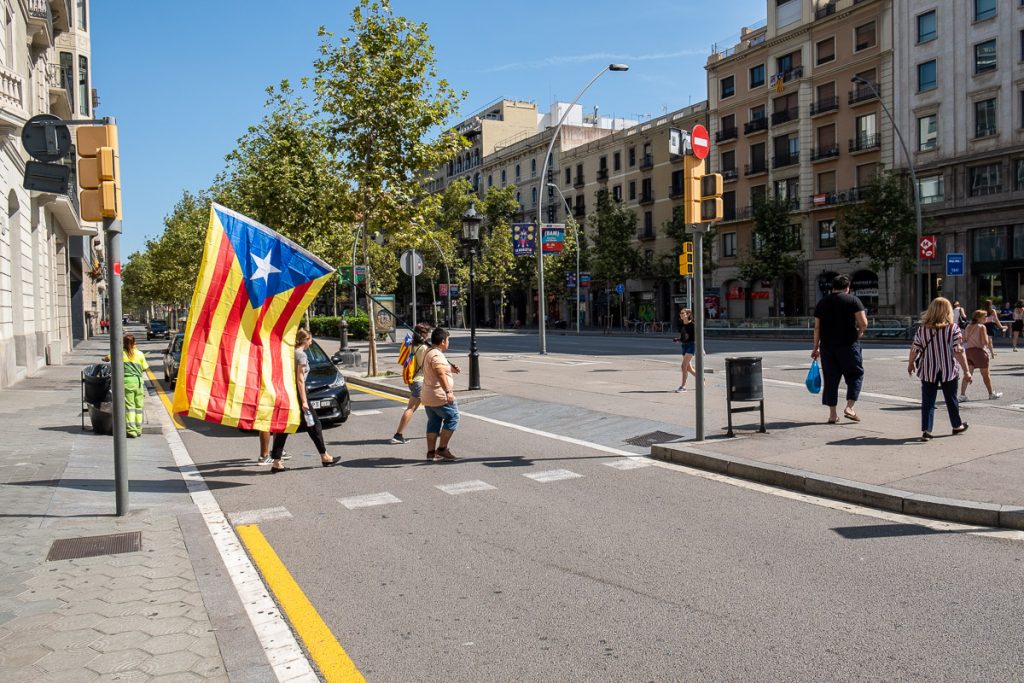 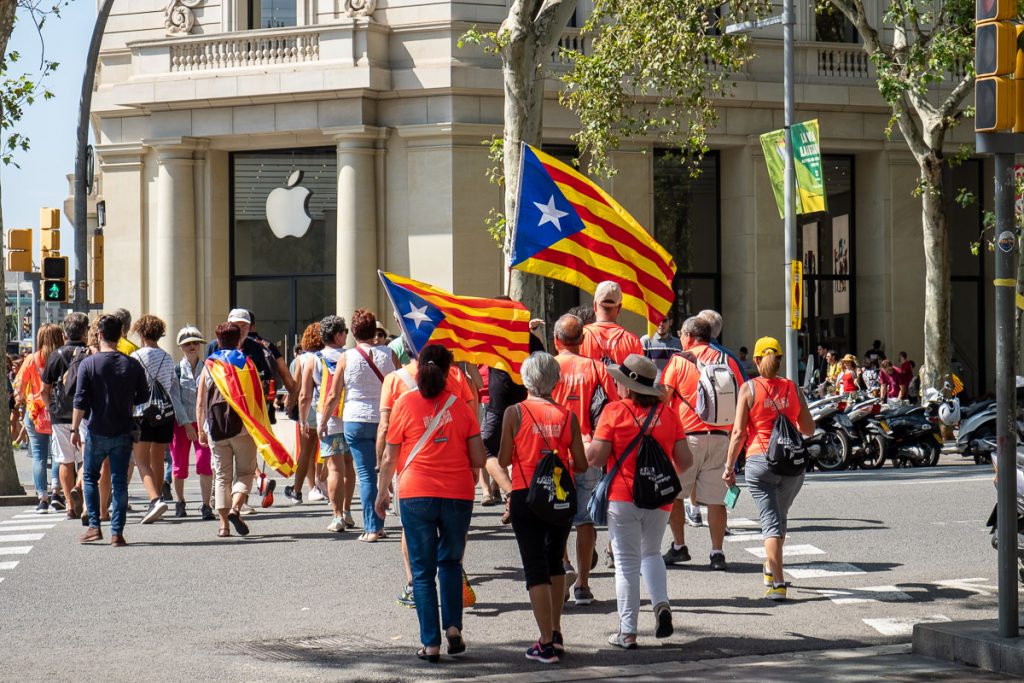 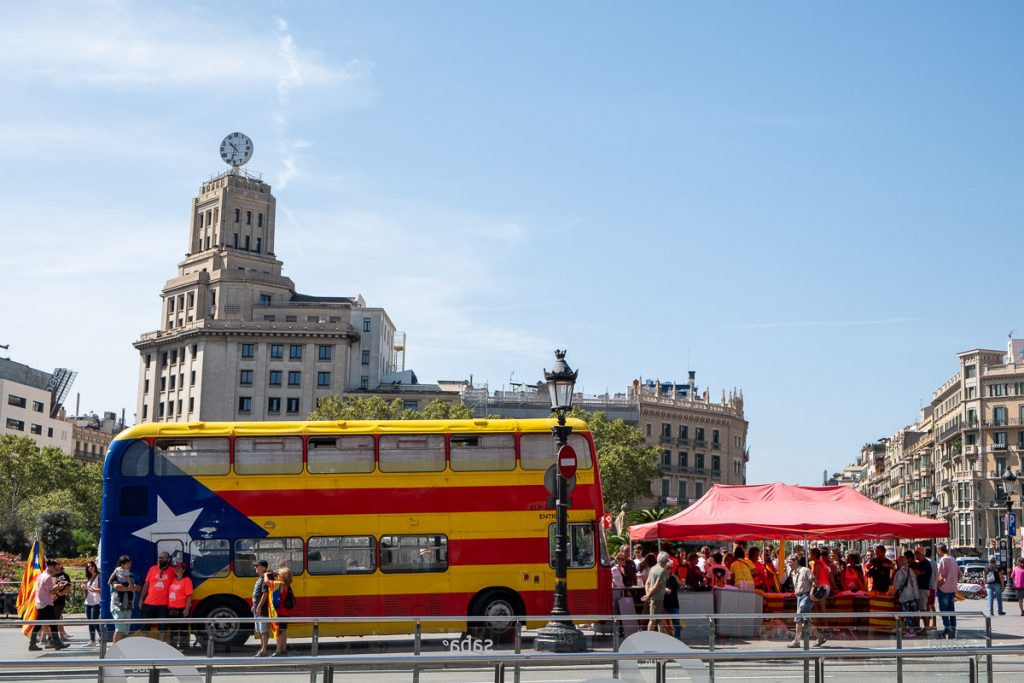 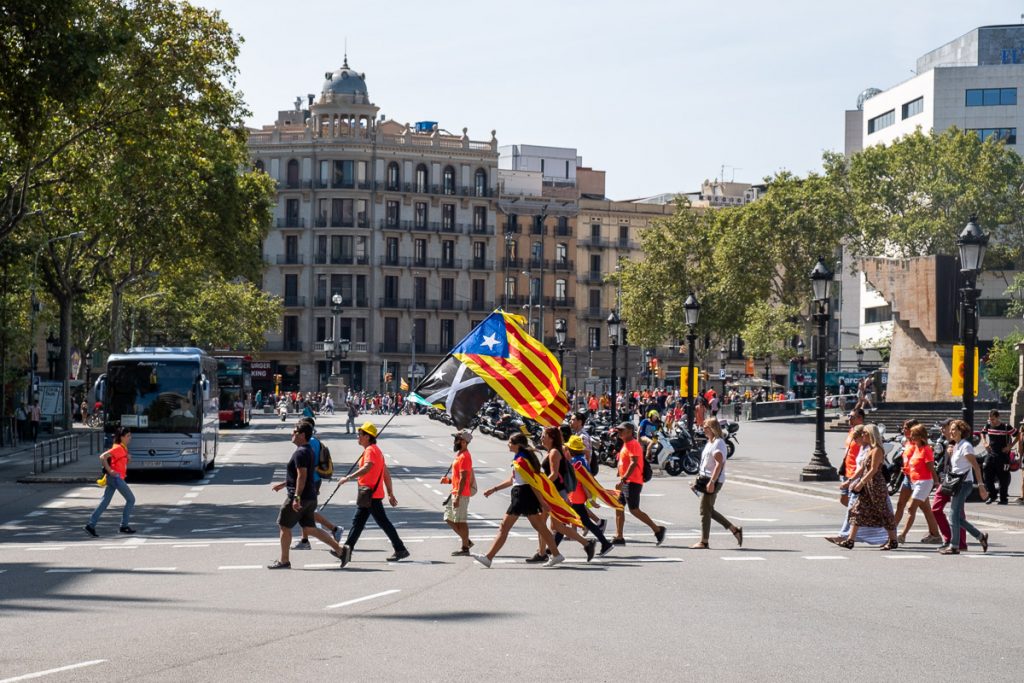 I was following another guidebook walk that would take me through the Gothic Quarter, an old area of the city filled with narrow winding streets and small plazas.  Due to the celebrations, the area was pretty crowded which made it difficult to get many pictures.

While it was fun and interesting to wander down the streets, there weren’t many awe inspiring buildings or structures. 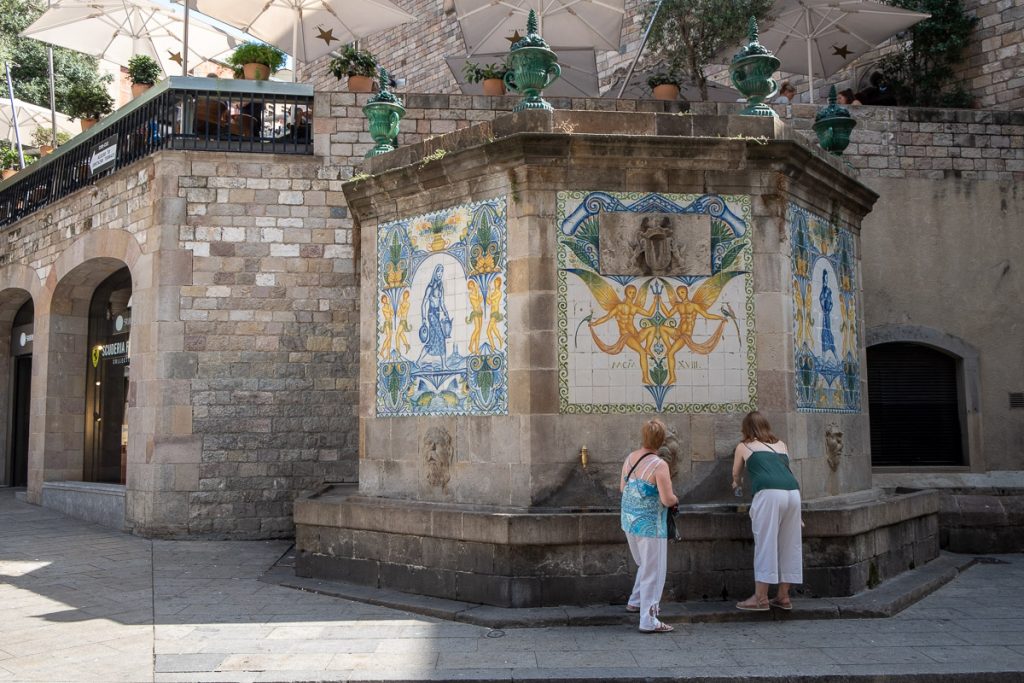 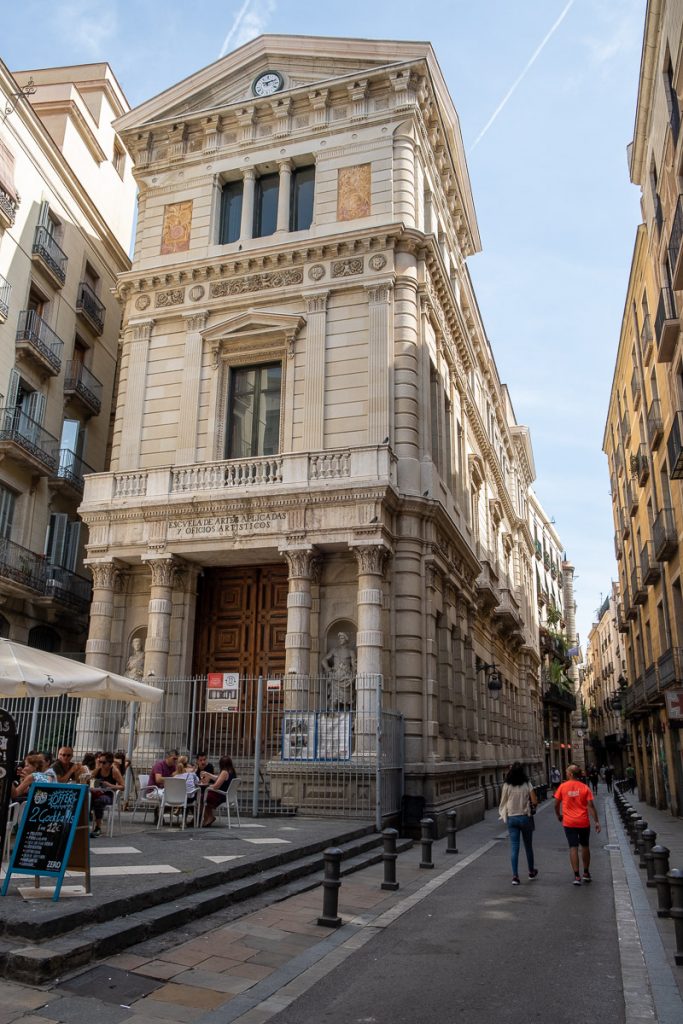 The Gothic church was cool, but the celebration had taken over the plaza in front and the best photo I could manage was the top of the spires, looking right into the sun.  If you could see the whole thing, you’d think it was cool too. 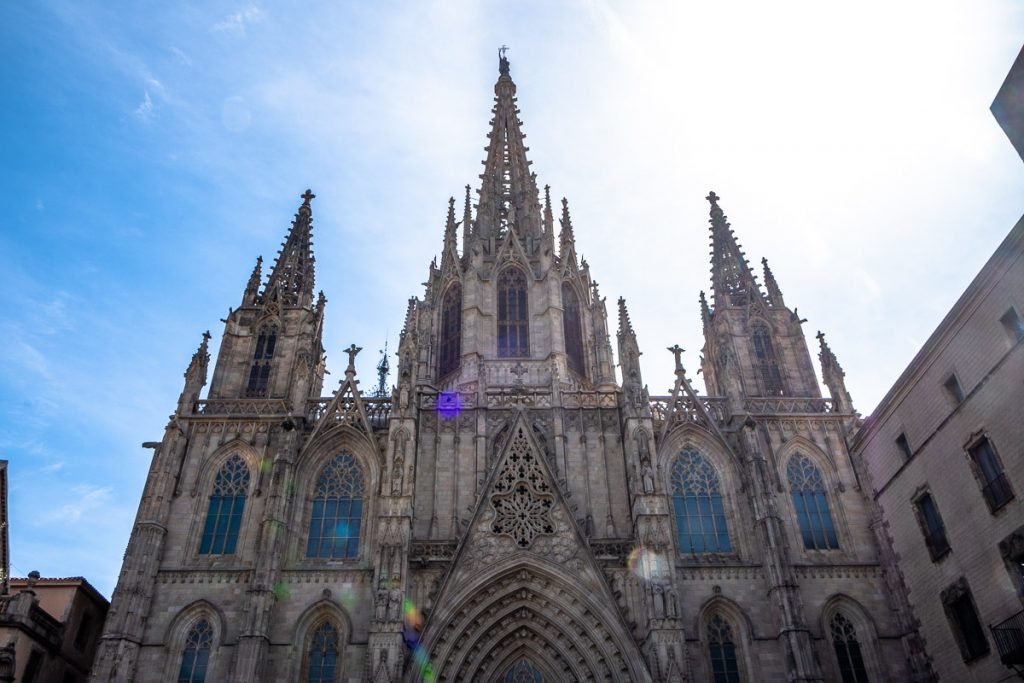 I took a quick break to get out of the sun in a little courtyard tucked away behind the church. The weather is quite warm, it is in the 80’s, and makes for some great days out walking. 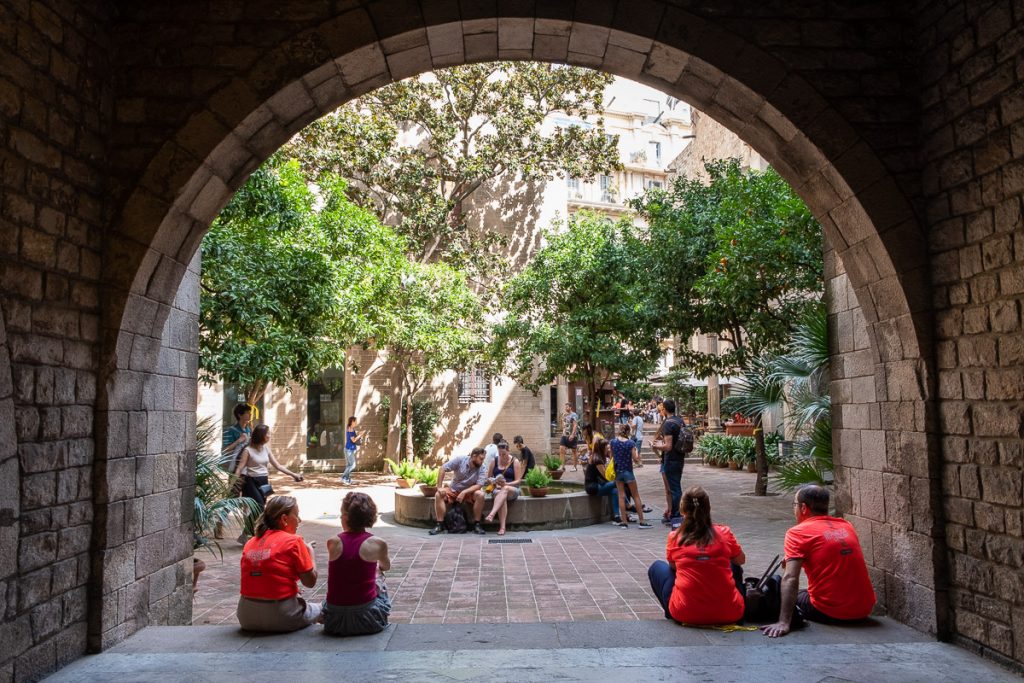 After the walk ended, I was looking at the map on my phone trying to figure out how to get back to the hotel when I saw I was a short walk from the George Orwell Plaza.  It wasn’t in my guidebook, but I had to go check it out.  There isn’t much to the small little plaza.  A few restaurants with outdoor tables and a large and very odd looking sculpture.  I’m guessing it was some sort of nod to Big Brother and 1984. 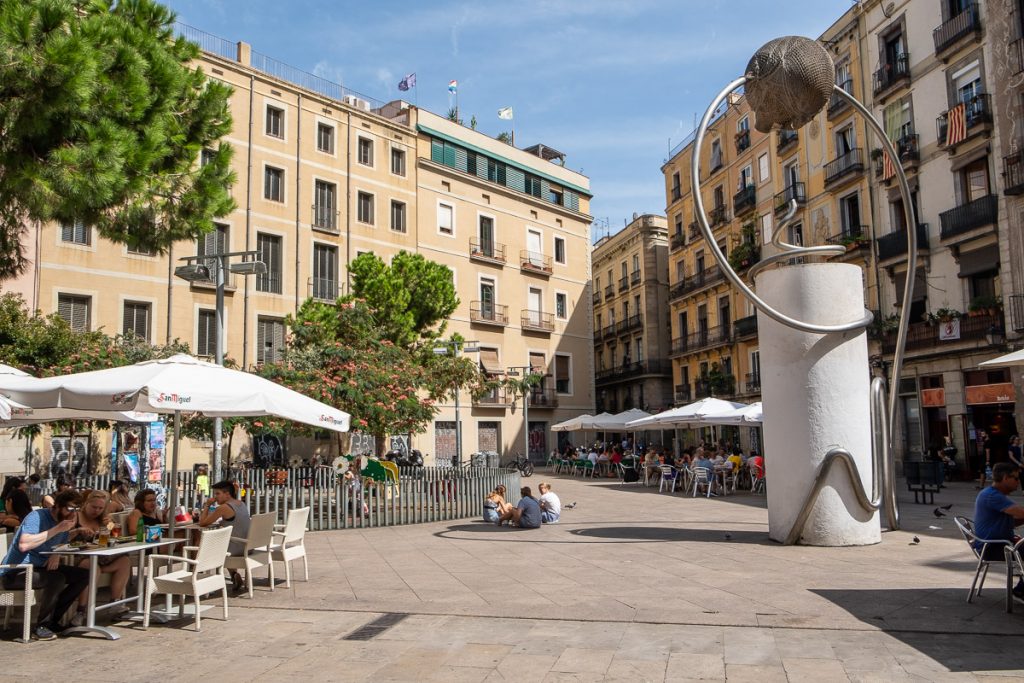 Back at the hotel, I made plans to go see La Pedrera.  It’s a house and museum by the architect Antoni Gaudi.  He has some of the most unique and interesting buildings I’ve ever seen.  Even though it is only a few blocks from my hotel, they offer better prices if you book online and reserve a time slot.  I reserved a spot for the afternoon.

On the walk up to the museum there is another of his houses, the Casa Batllo.  It’s tough to get a good photo as the buildings are obscured by trees.  I only grabbed one photo, but you can get an idea of the unique designs he is famous for. 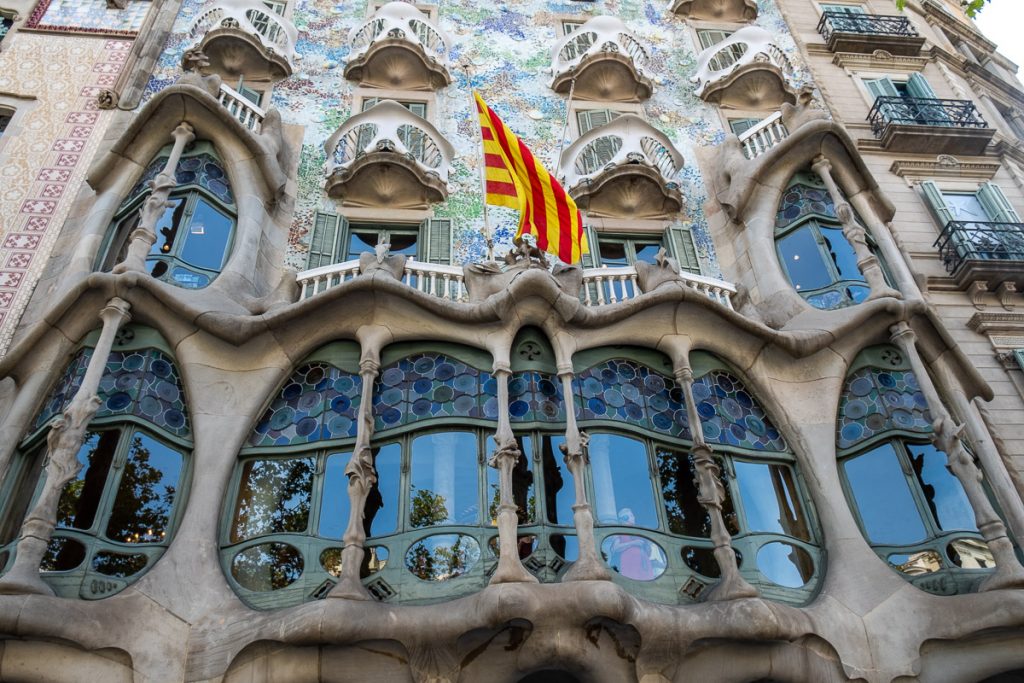 At La Pedrera the tour is self-guided with the help of an audio guide.  It starts in the building’s courtyard, open to the sky above. 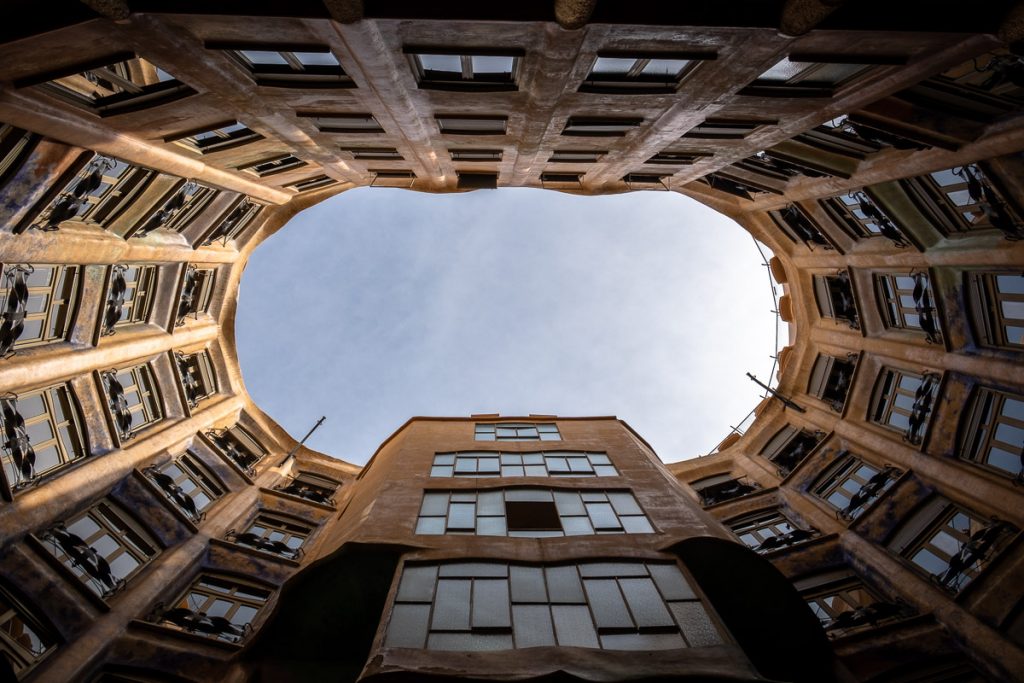 Gaudi took some of his design ideas from nature.  The cover over the stairway looks like a insects wing and the door emulates a butterfly wing. 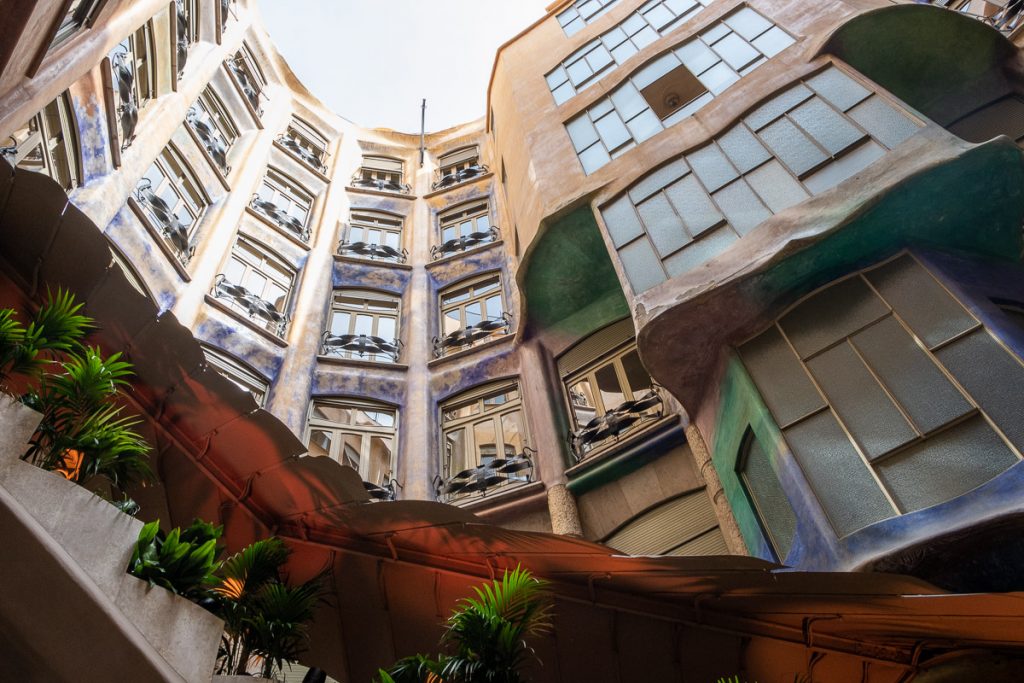 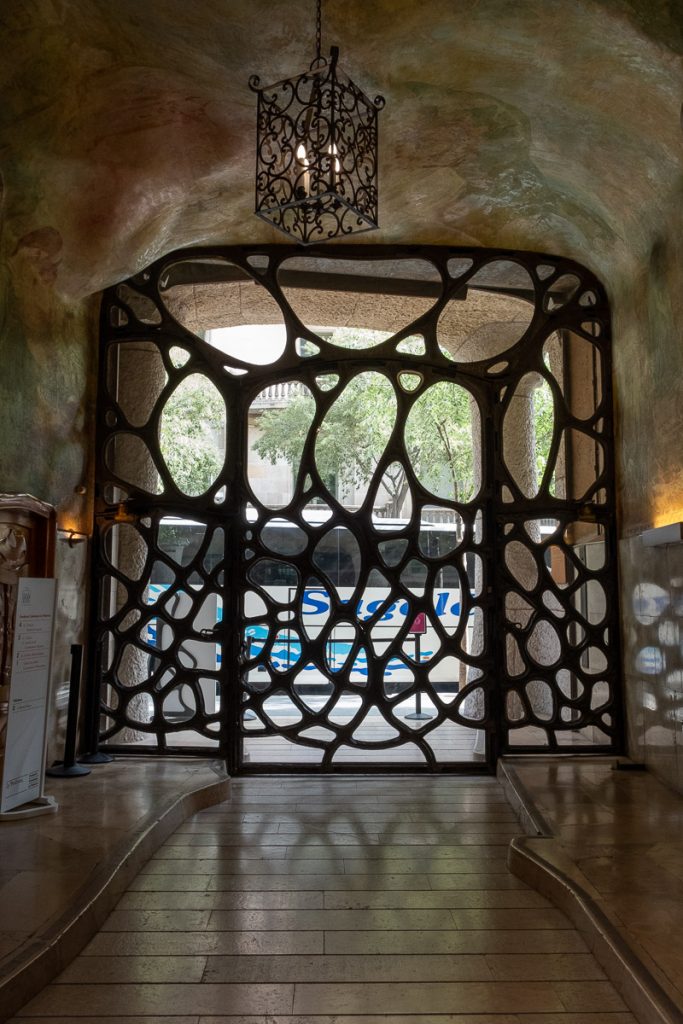 From there, an elevator takes you to the home’s most well know feature, the roof.  It rises and falls like walking among sand dunes, sculptures standing guard and watching over things. 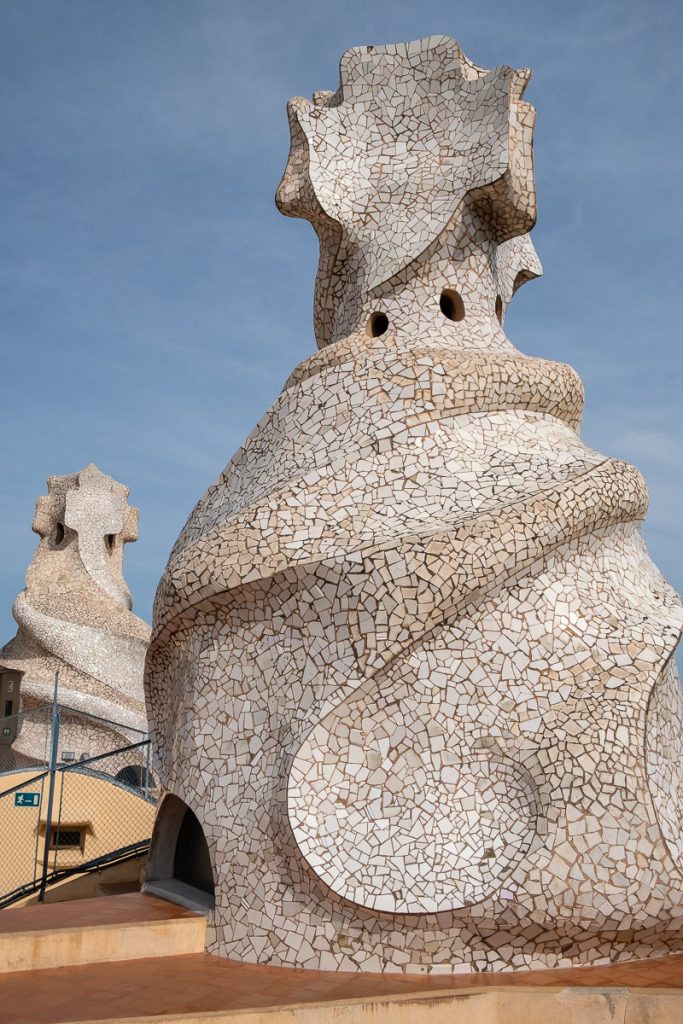 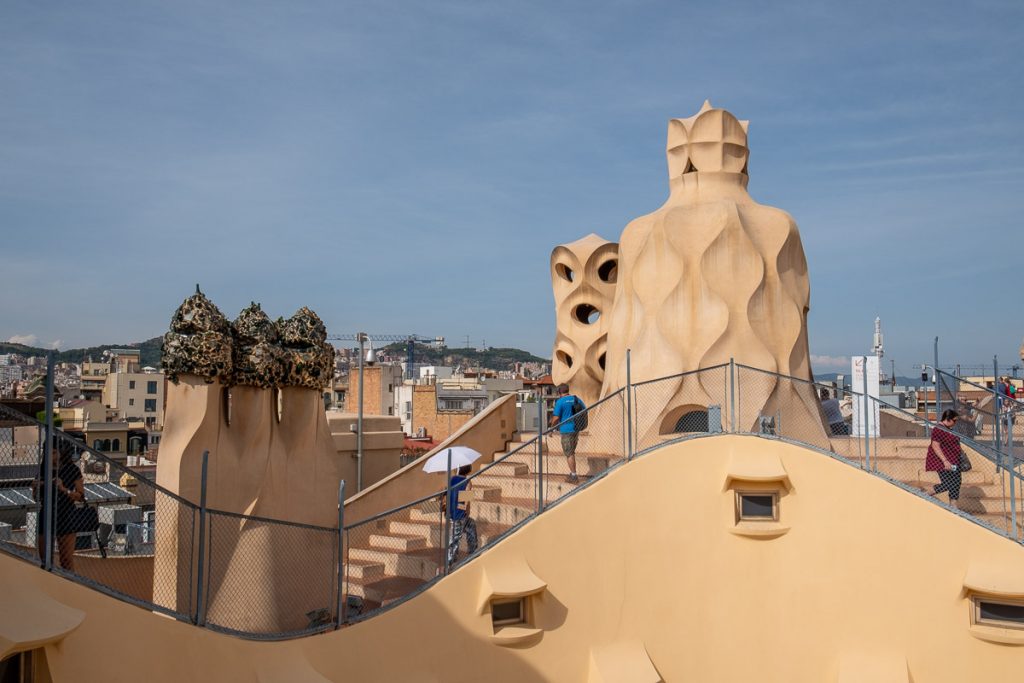 It has some great views of the city and the most famous Gaudi building, the Sagrada Familia church. 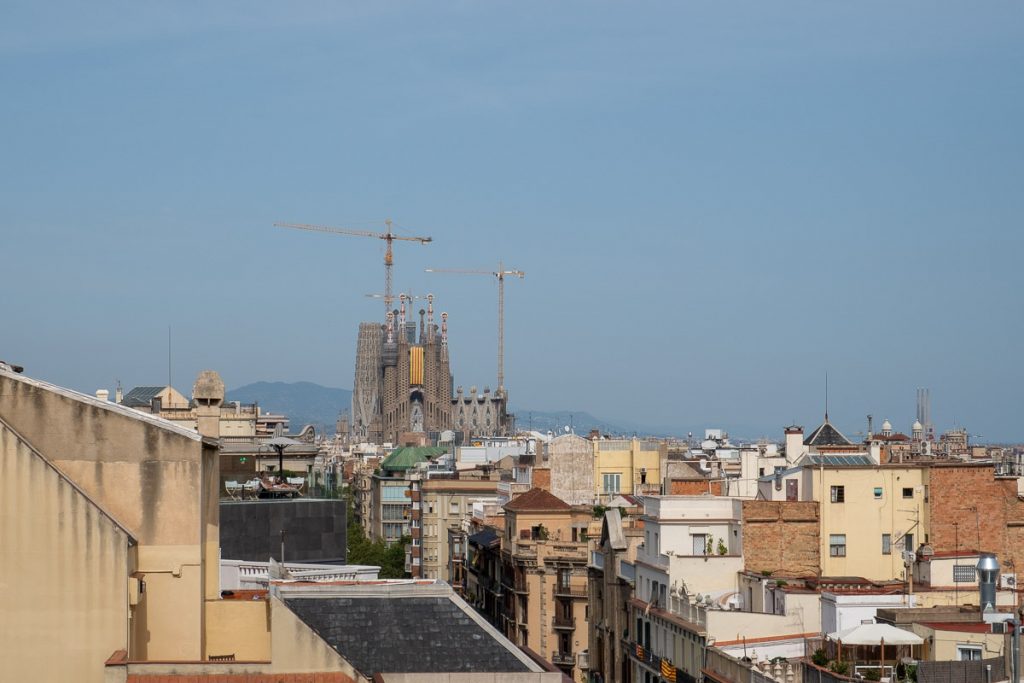 It also gave me a look at the growing number of protesters/revelers in the streets. 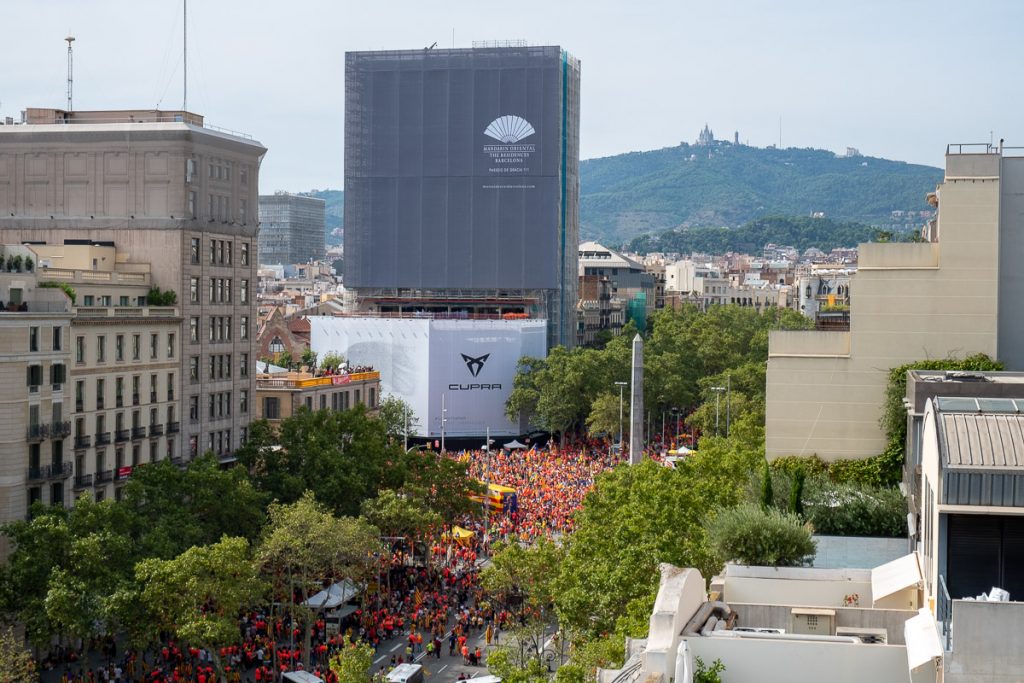 From the roof, the tour heads back to the lower levels that have been turned into a museum.  One of the more interesting displays showed the architect’s unique way of coming up with some of his designs.

Here is a model of another of his buildings, and what it would have looked liked if finished. 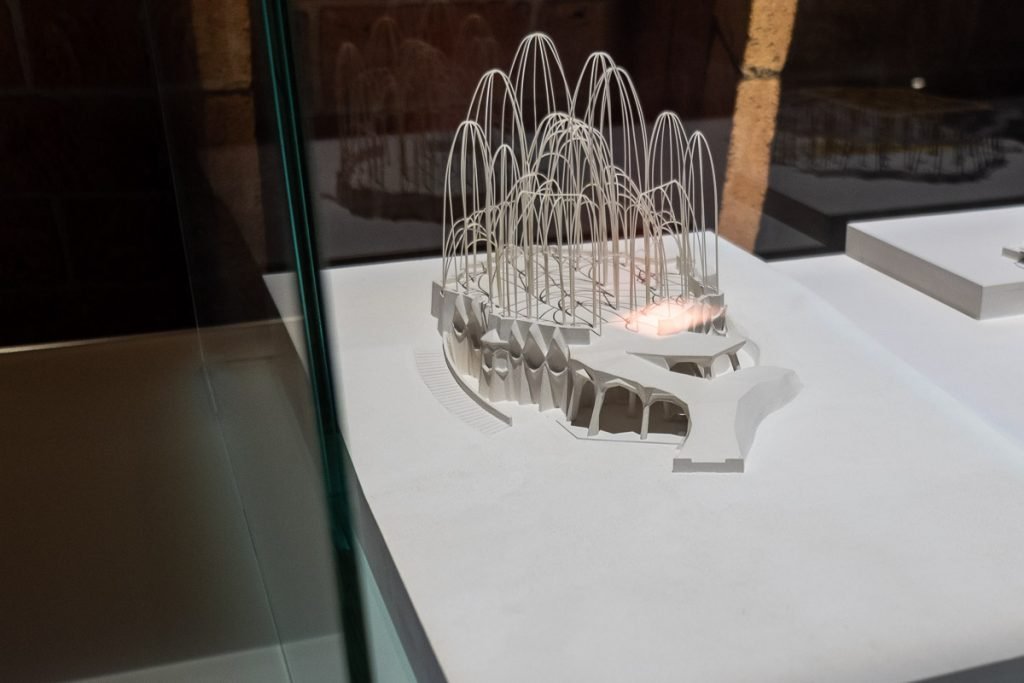 To get the design he hung chains from a board above a mirror. 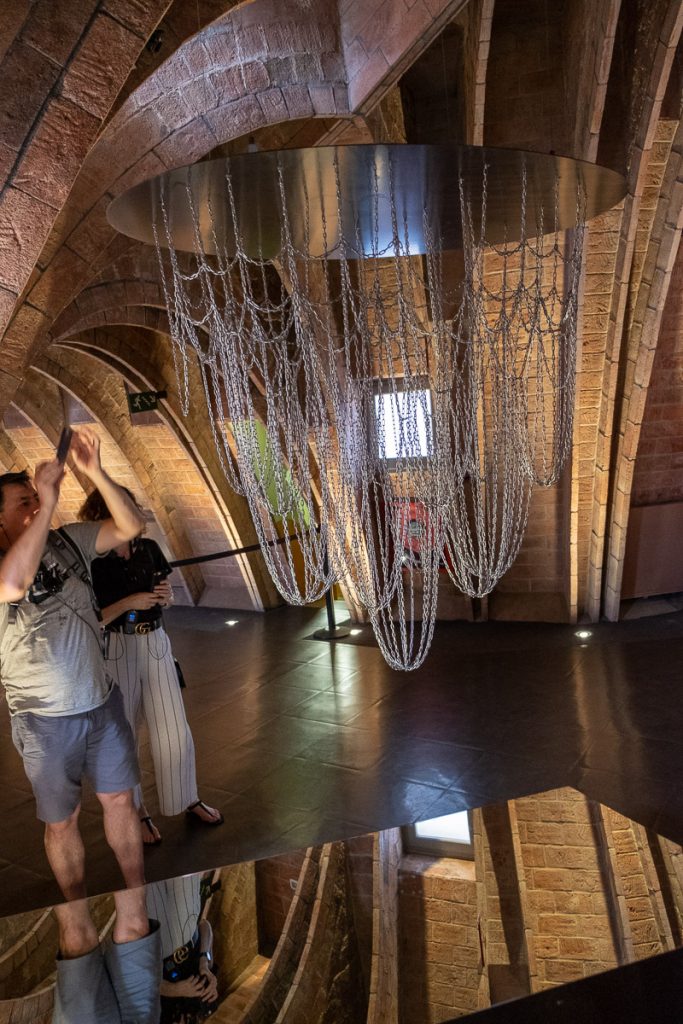 And in the mirror below, he could see what the finished shape should look like.

After the museum, you get to tour an apartment that has been preserved for visitors to see what it would have been like to live here. These were homes for the wealthy and were quite large, including servants quarters. 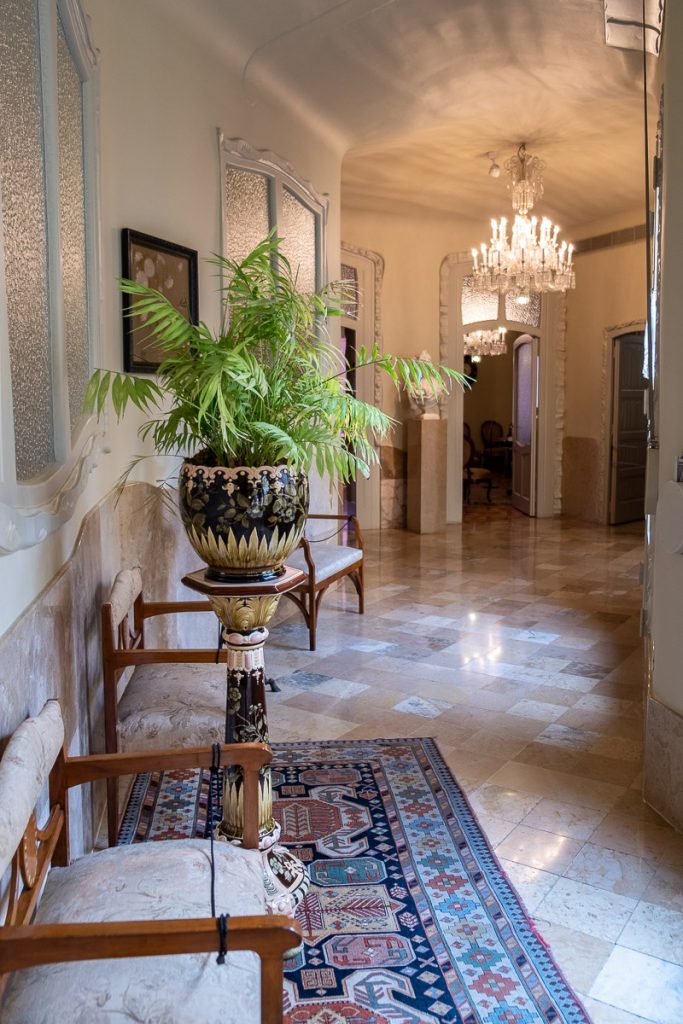 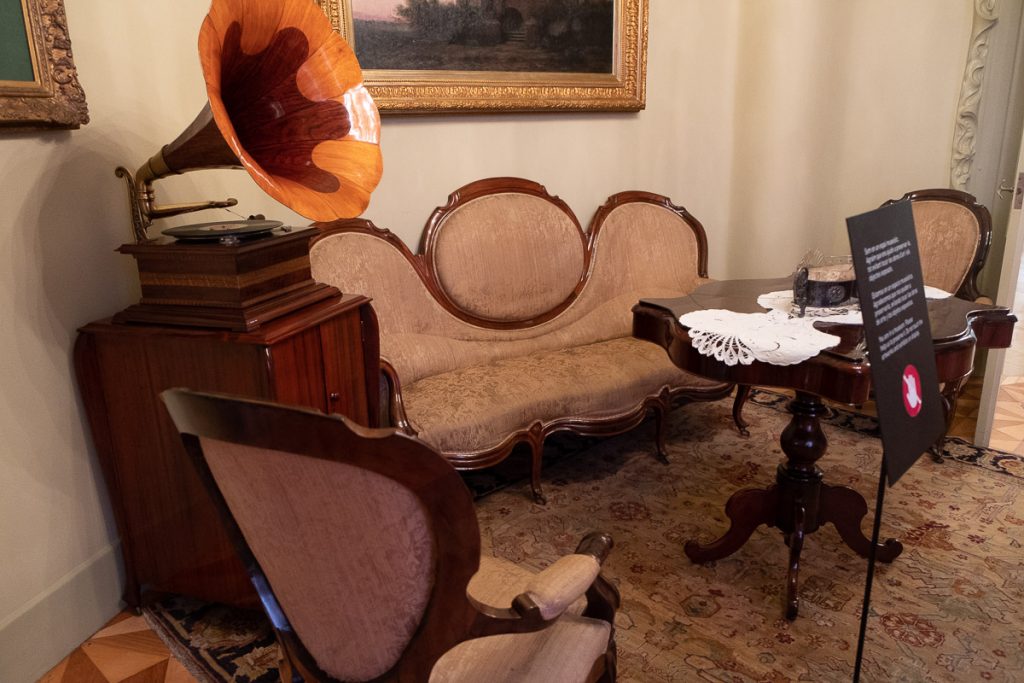 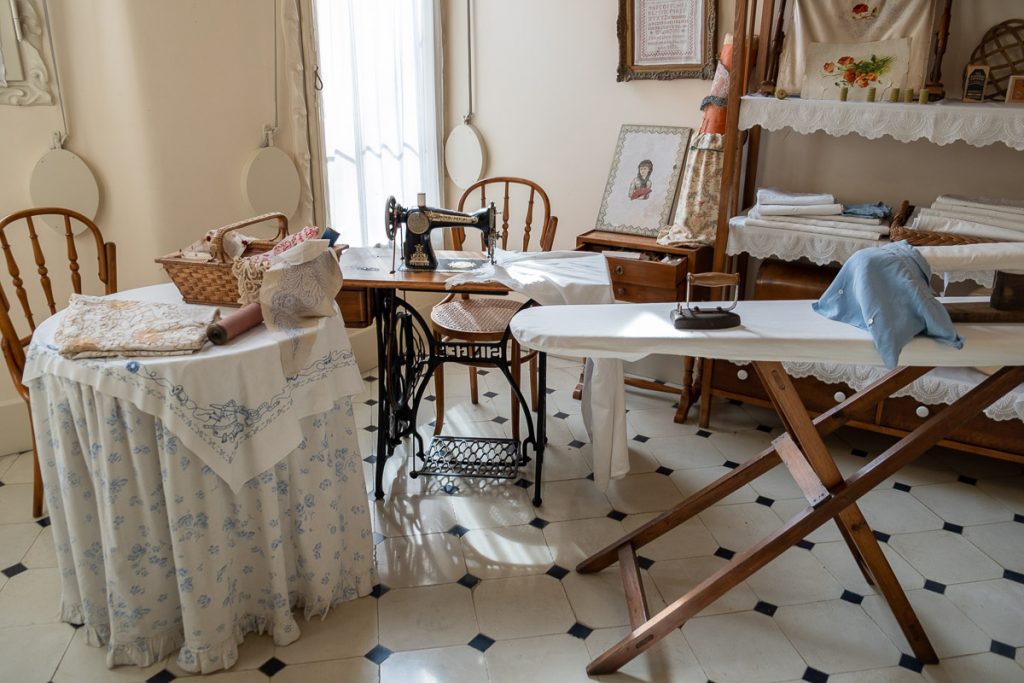 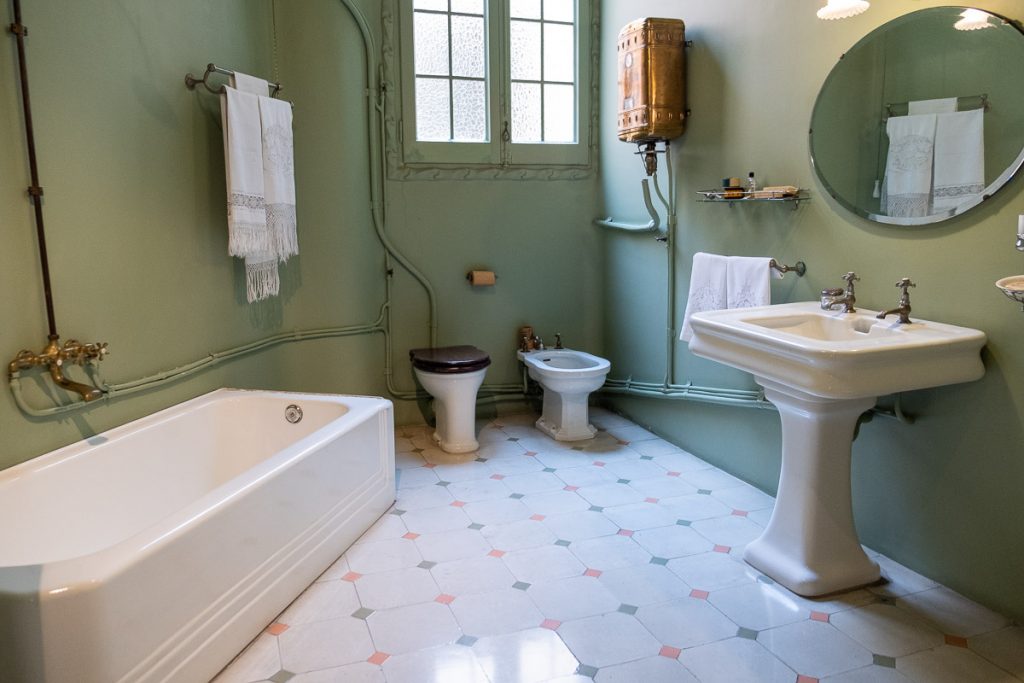 Day one of sightseeing in the bag.  Time for some tapas and cerveza.  Spain still holds onto the tradition of an afternoon siesta.  A lot of restaurants close after lunch and reopen around 8 pm.  However there are plenty of tapas bars and pubs that are open all day and into the night so getting a meal is never an issue.  Barcelona really comes alive in the evening.