One Day In Madrid

My last day in Barcelona didn’t quite go as planned.  I was anticipating making a trip to see the Sagrada Familia but I had waited too long to book my tickets.  At all the other attractions I was able to do it the same day, but when I went to book these tickets it was already sold out.  I ended up spending the afternoon at the beach and getting some things knocked off the to-do list.

I finished booking all my train tickets for the rest of Spain.  Doing it online should have been easy, but the Renfe (Spanish Train) website is notoriously problematic.  I ended up having to buy them on a third party website Loco2, then taking the metro to the train station to print them out on a vending machine – which kept rebooting.  Eventually, I got it squared away, despite the blue screen of death. 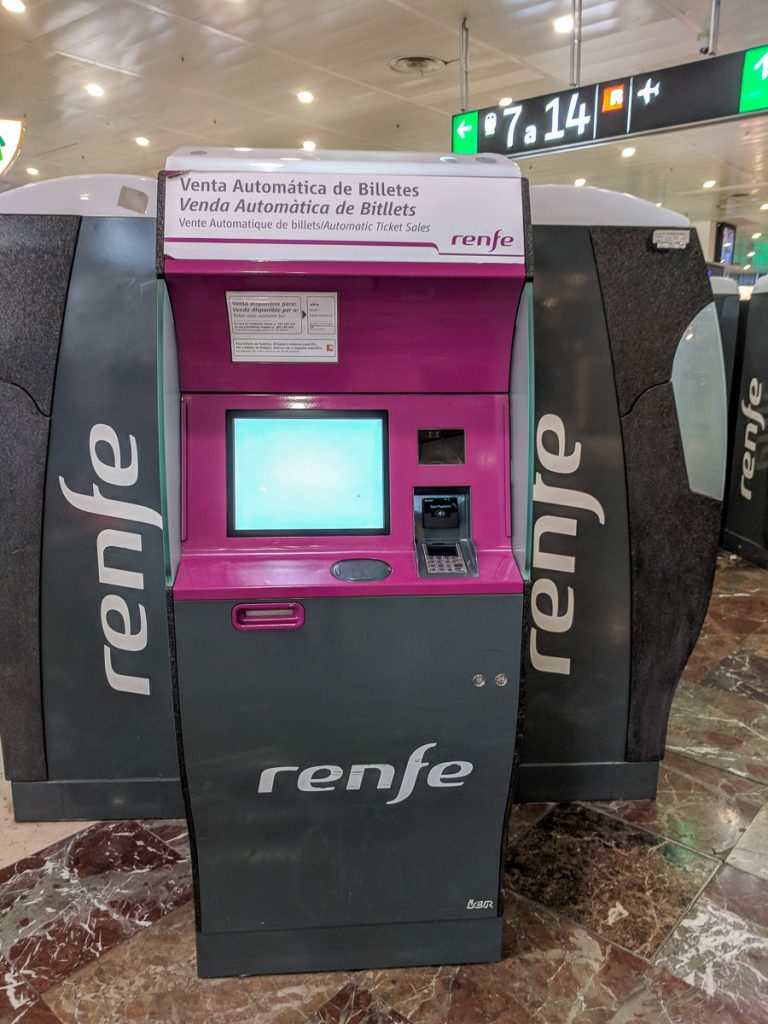 I took a late morning high-speed train to Madrid. When it comes to boarding trains, they do things a little different in Spain. It is set up similar to an airport. You have to pass through a quick security screening where your suitcases go through an x-ray machine.  Thankfully it’s just the bags, no need to go through a body scanner, take anything out of your bags, or take off your shoes, which makes it quick.  They then scan your ticket at an entry point before letting you down to the tracks, which means there are no conductors on board checking your ticket.

As the train sped on it’s way to Madrid, I noticed the landscape passing by my window was surprisingly arid and reminded me a little of Arizona.

Once I arrived in Madrid, I grabbed a taxi to the hotel.  The guidebook once again made it seem like taking public transport would be too much of a hassle. The taxi driver didn’t speak much English so I showed him the hotel address on my phone.

He pulled up next to the hotel and pointed.  I paid my fare and walked inside.  It was only then I noticed he dropped me off at the wrong hotel.  The address said Santa Domingo, which was the road.  He dropped me off at the Santa Domingo Hotel.  As I was in the middle of swearing and thinking ill of my taxi driver, I looked down and realized I had left my camera bag in the taxi.  As I was running out to see if I could catch him, he was walking in with my gear.  All was forgiven, and I already forgot I was at the wrong place. I couldn’t thank him enough.

Fortunately, I wasn’t too far from my intended destination and I hoofed it the rest of the way.  It was another tiny hotel room, but once again in an excellent location near the Plaza del Sol.  As my trip made its way south of the Alps, my hotel prices were increasing but the rooms aren’t getting any bigger.  Thankfully this one has a proper size shower.

I wanted to have longer in Madrid, but due to some last minute shuffling of schedules and air travel, I would only get one full day and two half days.  Not wanting to waste time I headed out immediately to check out the Plaza and to see the Royal Palace.

While the palace was still open, I wanted to save it for the next day to make sure I had plenty of time to wander around.  Instead, I had a look through the palace gates. 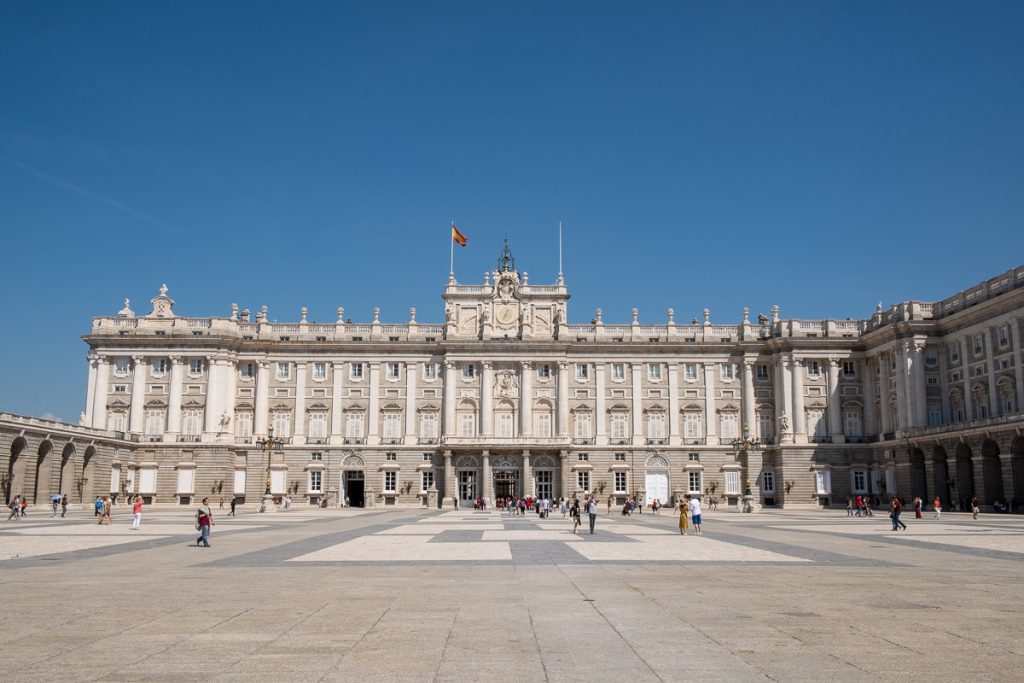 Directly opposite the palace is a cathedral which I didn’t bother to visit as I’ve seen quite a few. 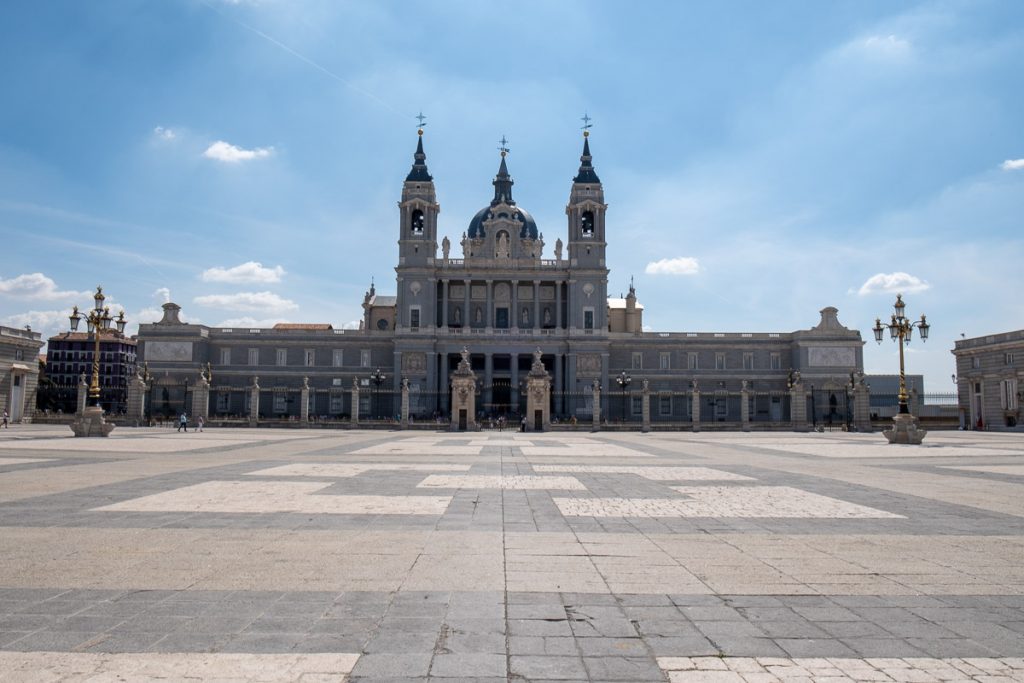 On the other side of the palace, there were a few guards on duty. 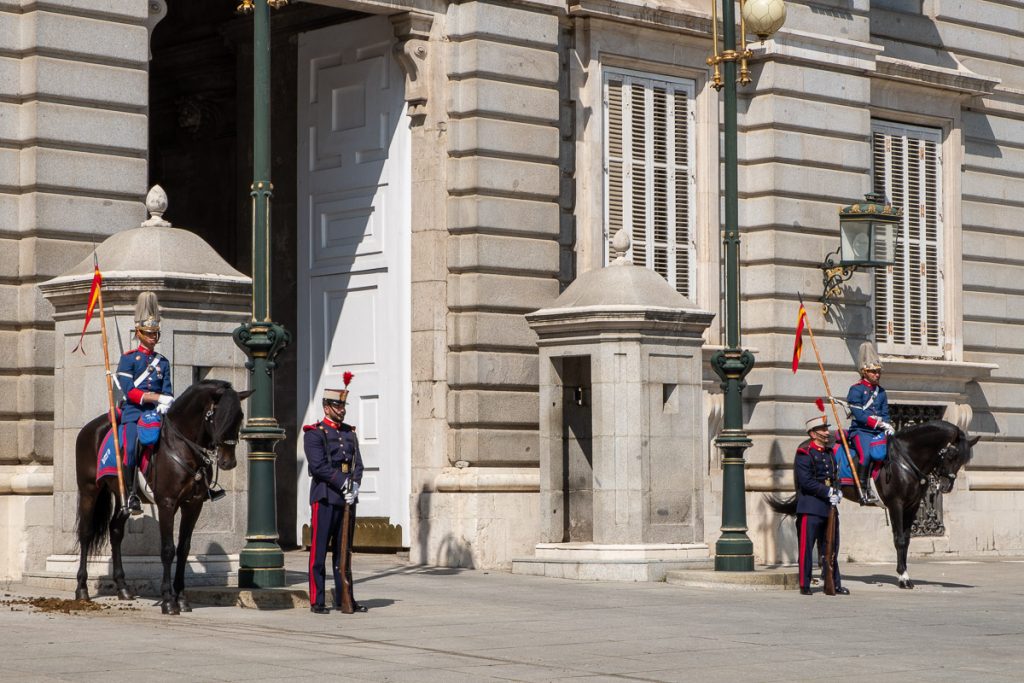 They actually do a formal changing of the guard ceremony inside the palace gates, but that only happens once a month.  From my research, it looks like it is quite the show, but unfortunately, it wasn’t going to happen while I was there.

The next day I headed out for my tour of the Royal Palace.  I could only take photos in the entry and on the grounds, but not inside the palace itself.  The Royal Palace is considered one of the best palaces in Europe behind the likes of Versailles and Schoenbrunn. 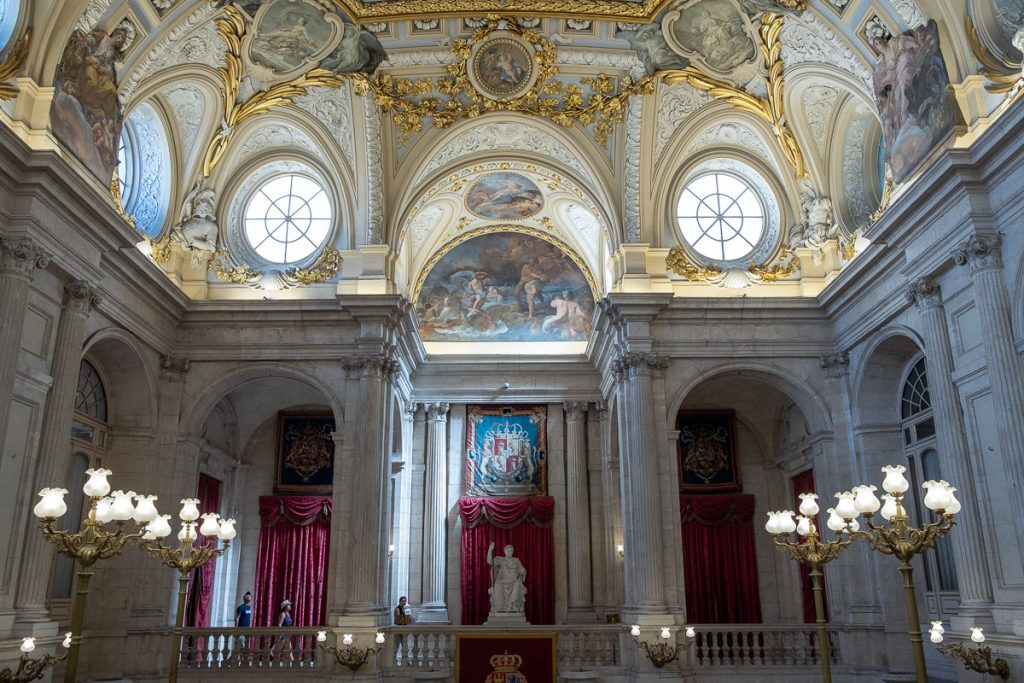 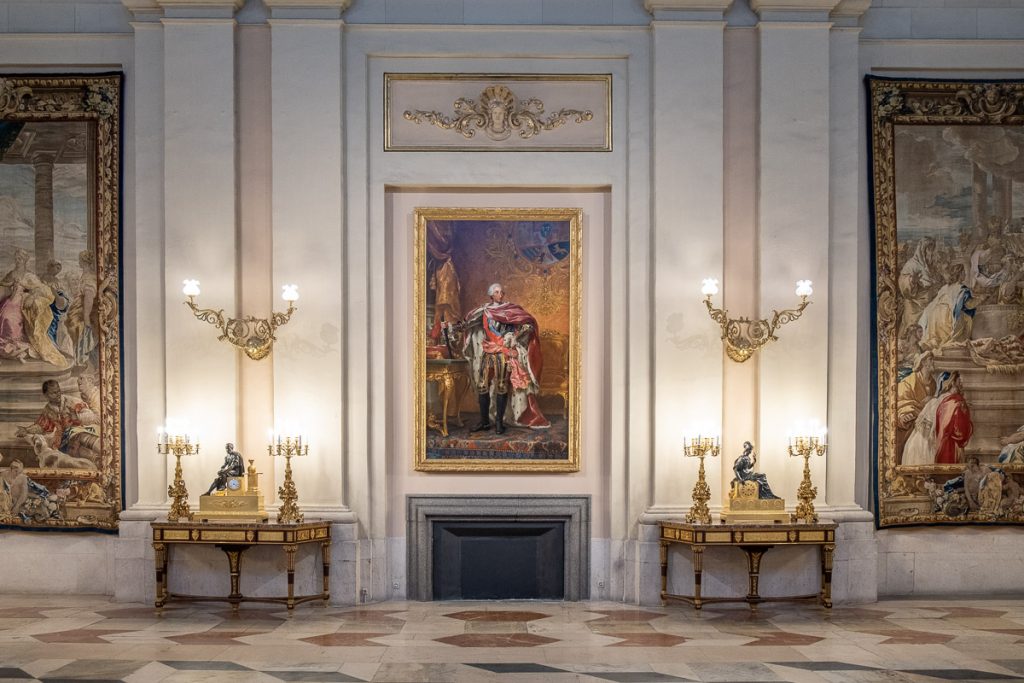 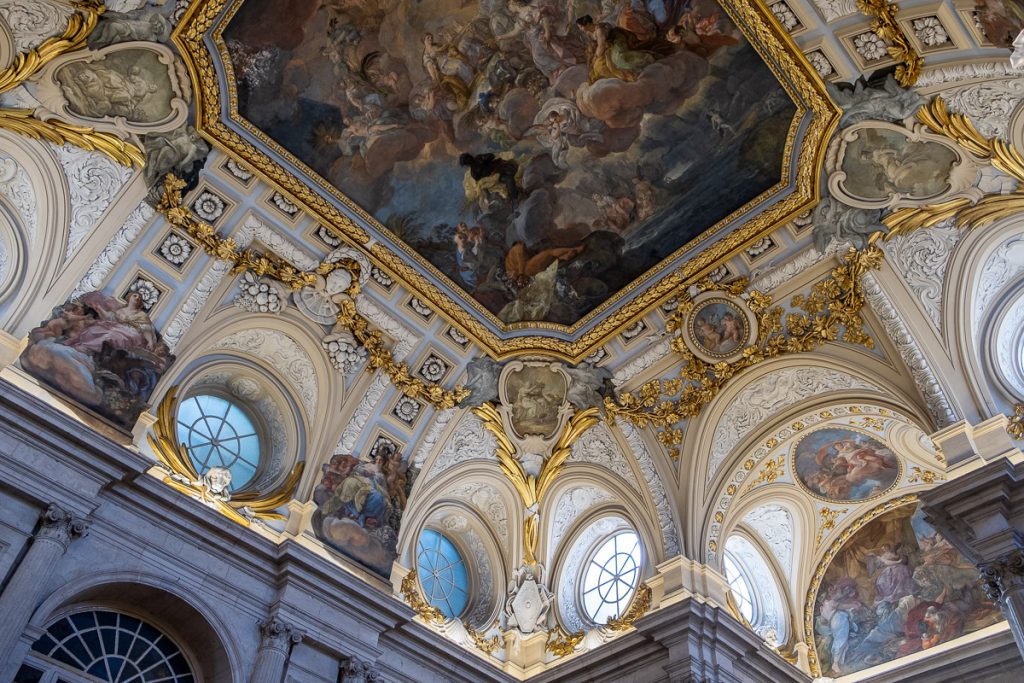 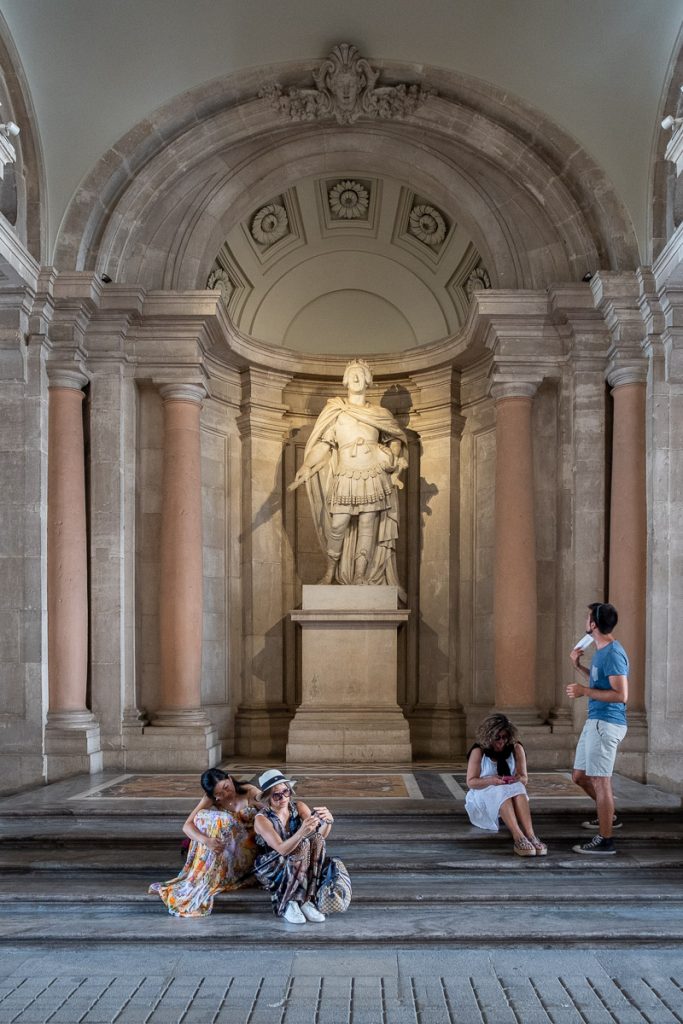 I spent some time wandering around the grounds before checking out the armory.  It covers two floors and is the best collections of Medieval arms and armor I’ve seen in Europe.  Unfortunately, no pictures allowed here either. 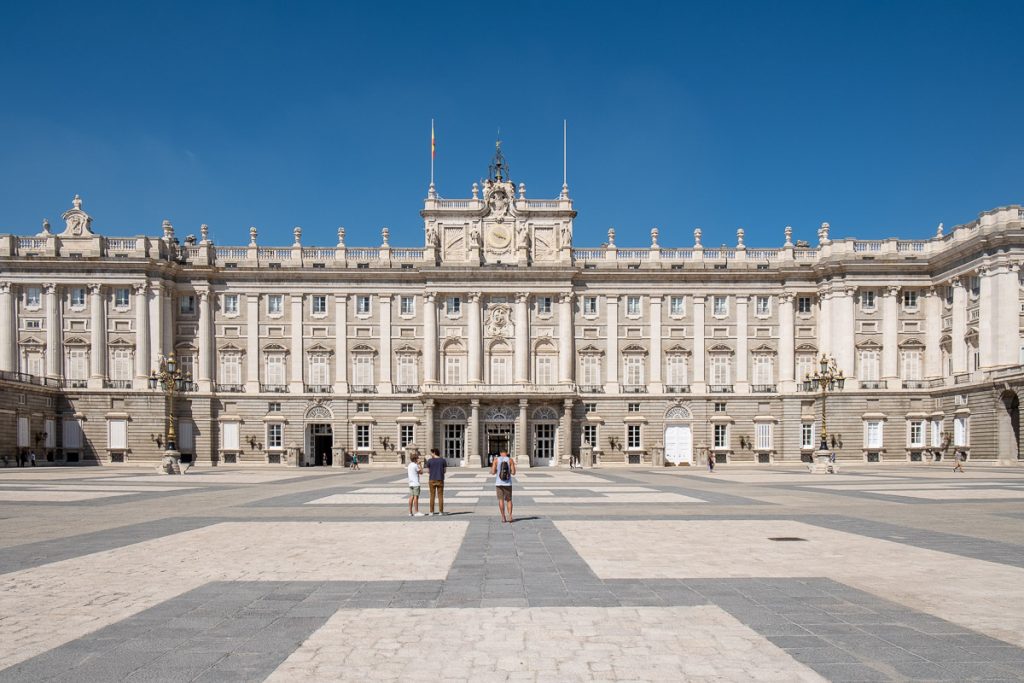 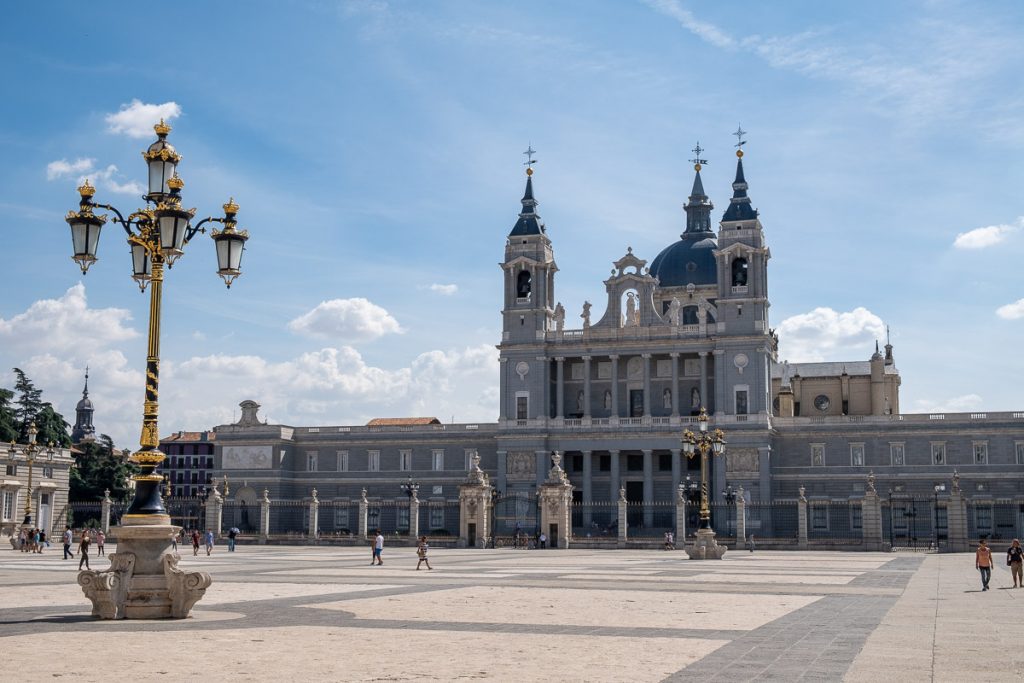 I had said that Barcelona comes alive at night, I found it even more so in Madrid.  The evening paseo (if I haven’t mentioned it previously, that translates to a walk in English), has people filling the streets as the temperatures get cooler.  Plaza del Sol is busy with people walking, eating, shopping, talking, and sitting there to enjoy the atmosphere. 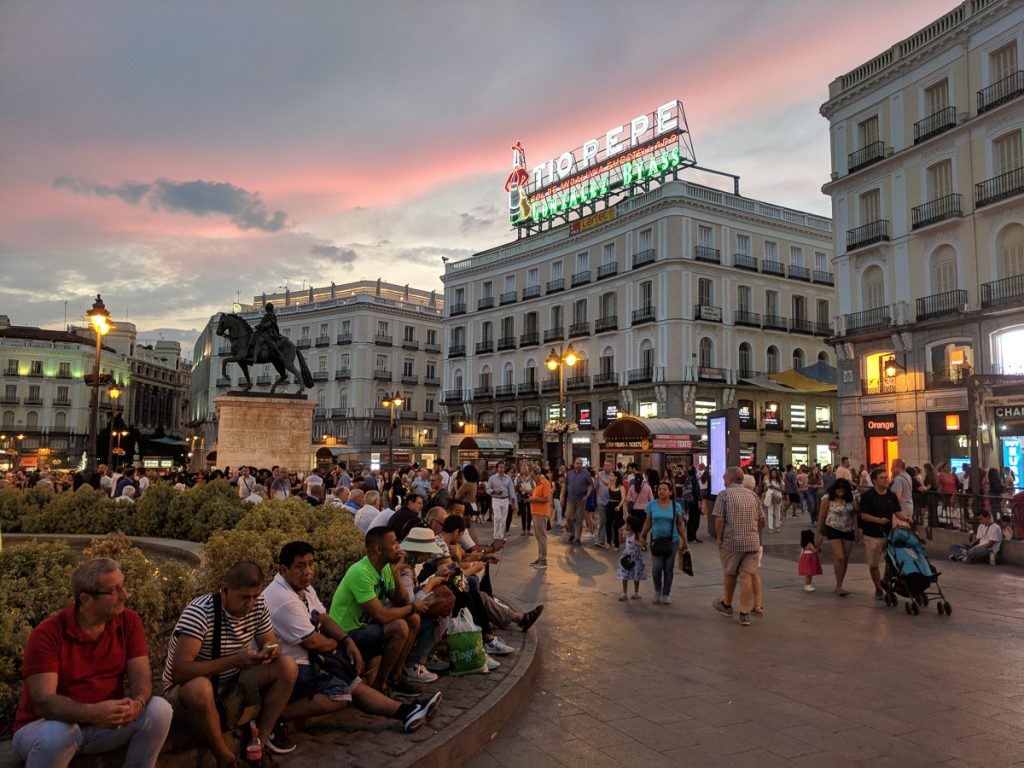 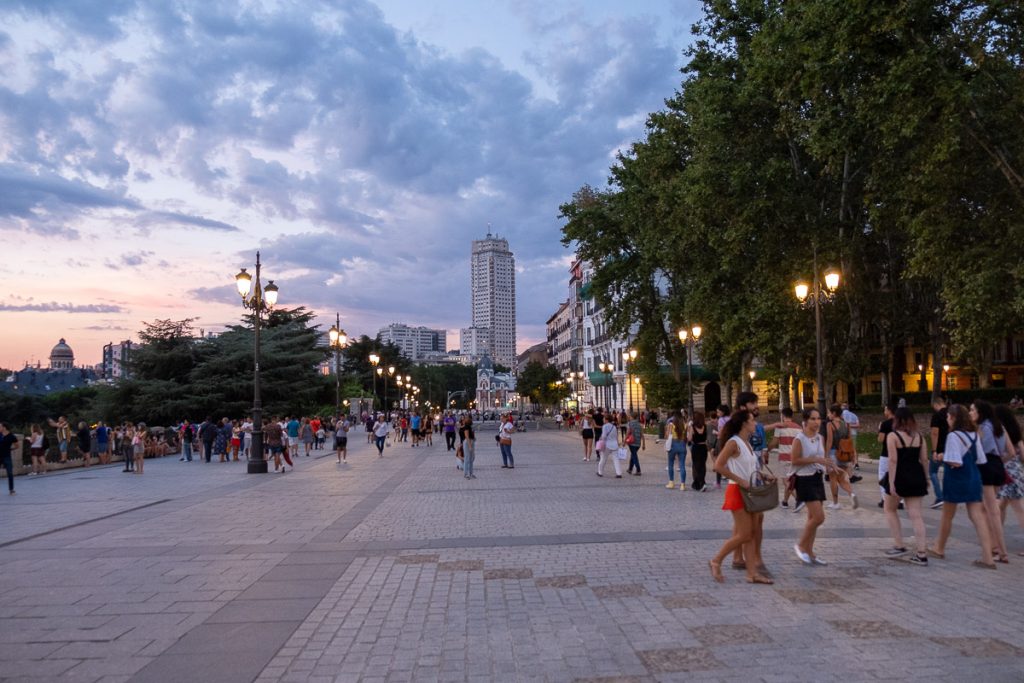 I spent some time strolling around the streets, enjoying in the laid-back vibe of Madrid. I stopped back at the Palace where I grabbed a few shots as the last bit of sun was dipping below the horizon. 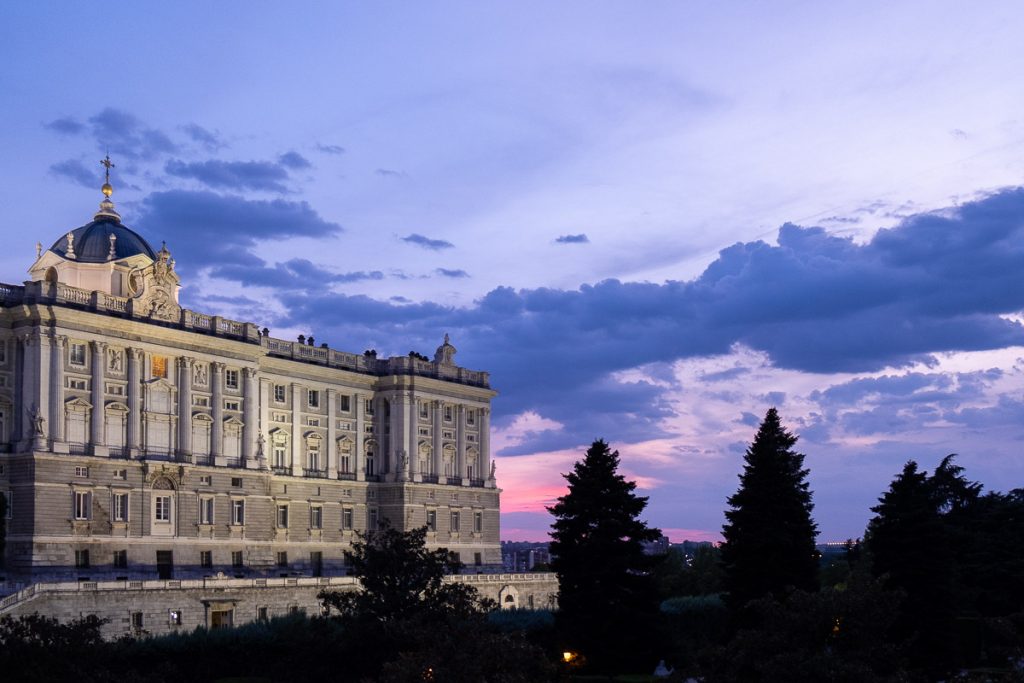 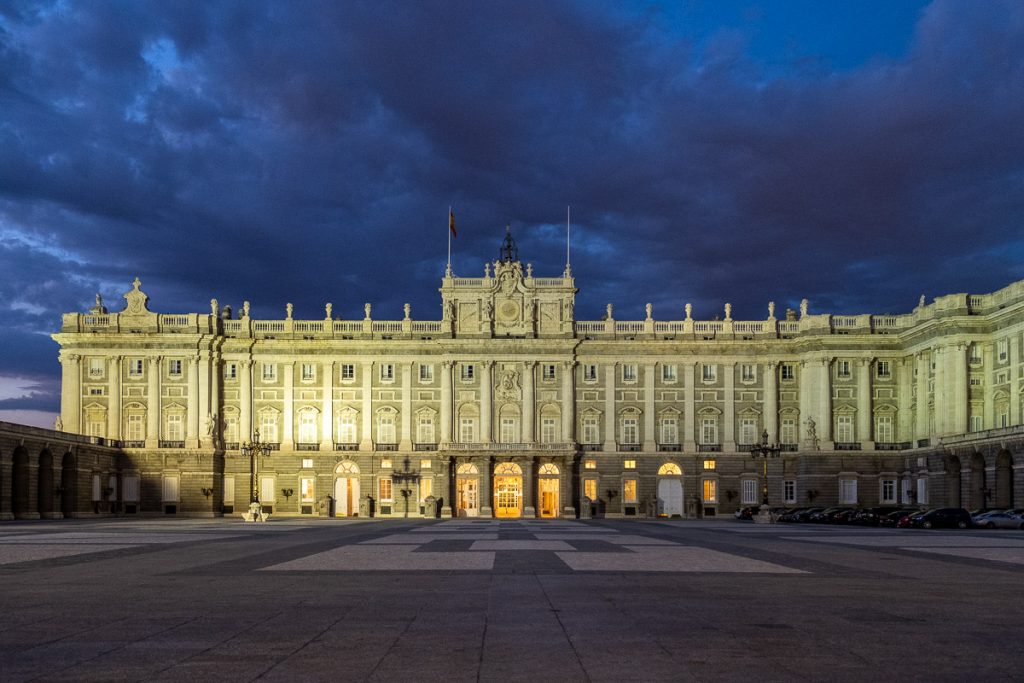 Madrid is a city that stays up till the wee hours of the morning, but I had an early train to catch and had to call it a night.

2 thoughts on “One Day In Madrid”