The weather wasn’t looking any better for my second day in Salzburg.  It might have even been a little worse.  Rain or shine I was going to see the castle.  By the time I got to town I was already pretty soaked.  I saw an umbrella in a little shop outside St. Peter’s and thought the 6 Euro price was well worth it.  I’m guessing that the shop was doing good trade in umbrellas that day as there were three people in front of me making a similar purchase.

As I get to the base of the hill I’m happy to see there is a tram to take you to the top.  You can also walk, but it looks like a difficult climb, which doesn’t look that fun to do on a sunny day, much less in the rain.  I learn a new word today – funicular.  That’s a cable car that goes up a steep incline, and what I would be taking to the top.  The also call it the FestungsBahn – Fortress Train. 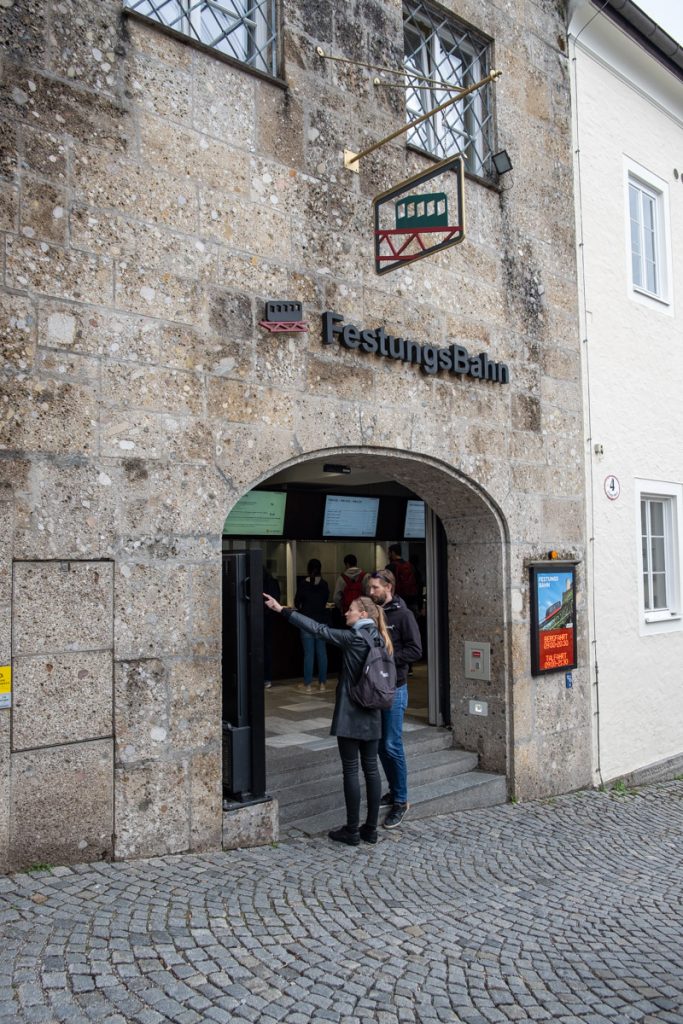 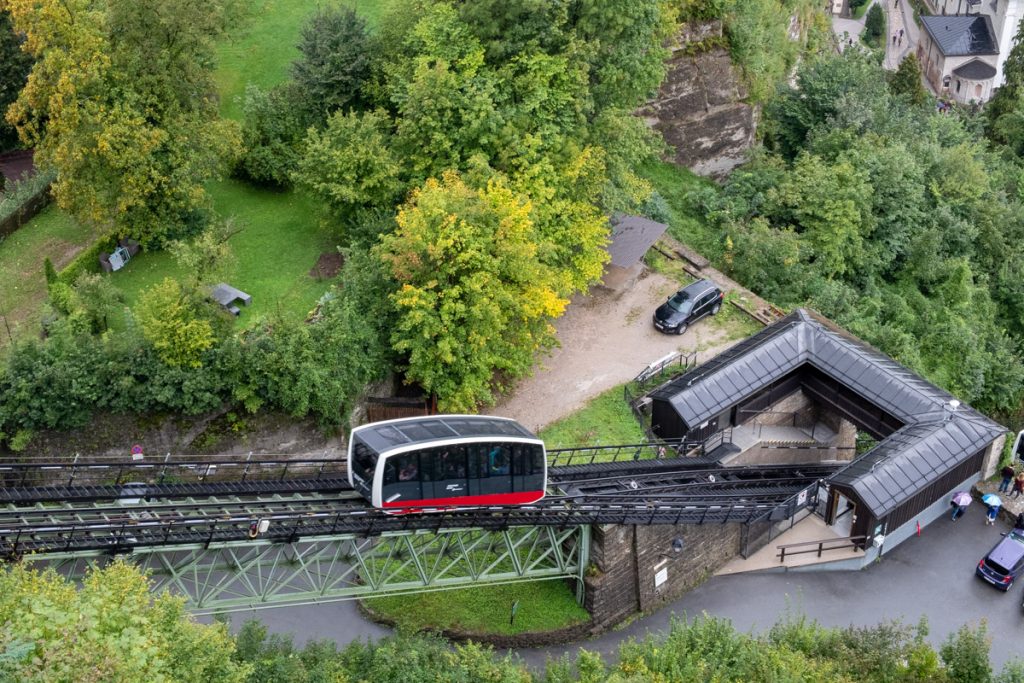 The rain lets up just as exit the funicular and into the castle grounds.  I keep calling it Salzburg Castle, which is incorrect.  It’s actually called Hohensalzburg Fortress, which means “High Salzburg Fortess.”  The fortress has some amazing views of the entire valley. 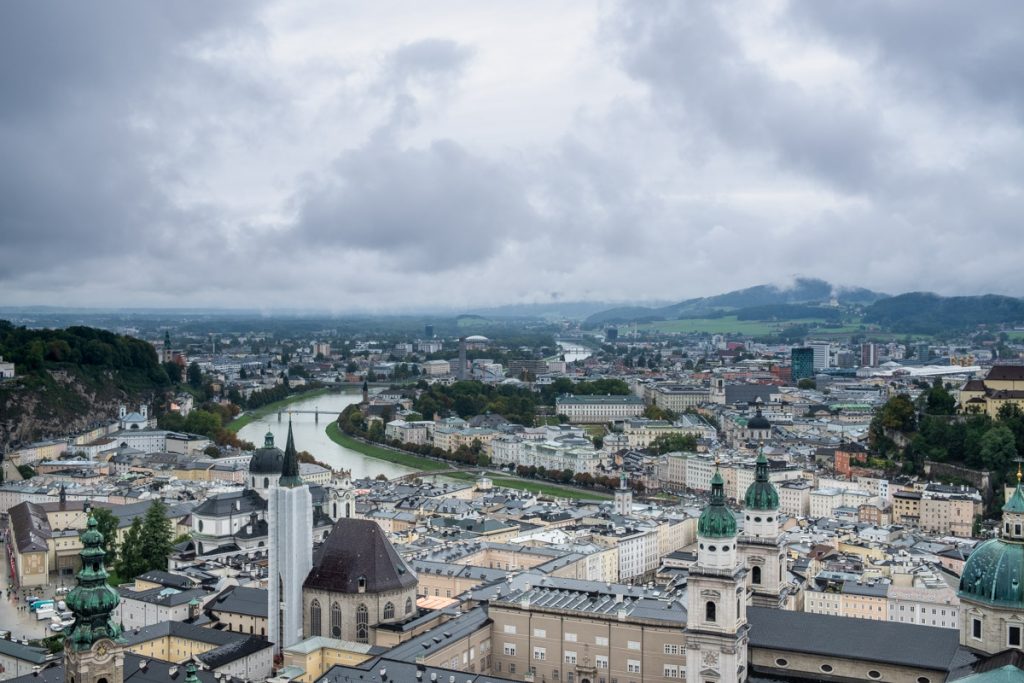 Inside there are several buildings you can tour.  One is a museum that walks through the military history of the Austrian Empire from Medieval times through the First World War.  As well as a room filled with torture devices from the Middle Ages. 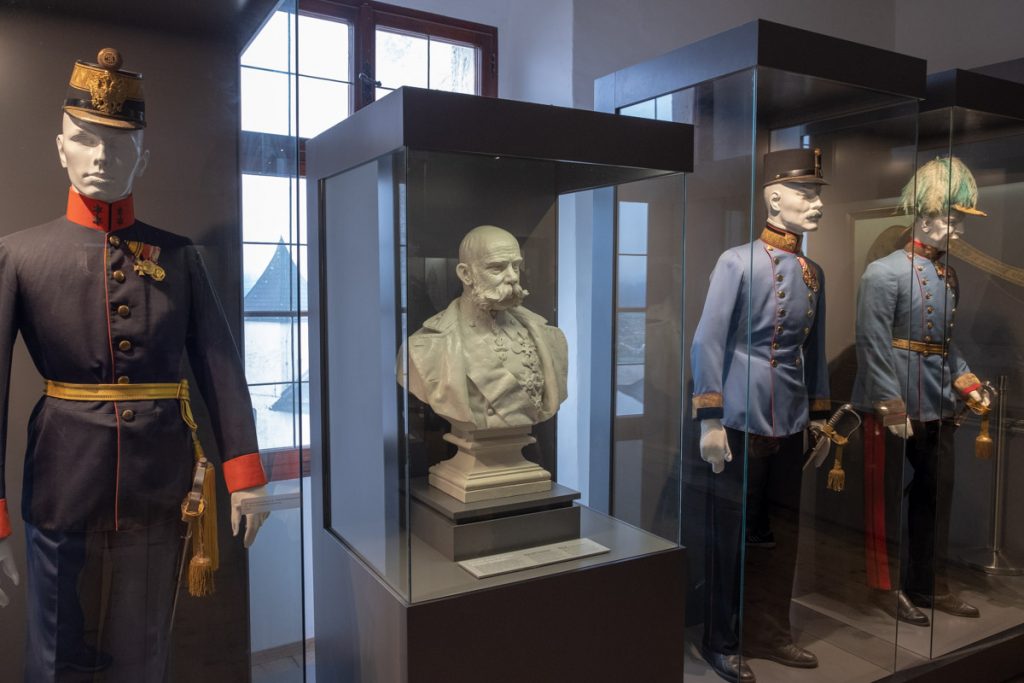 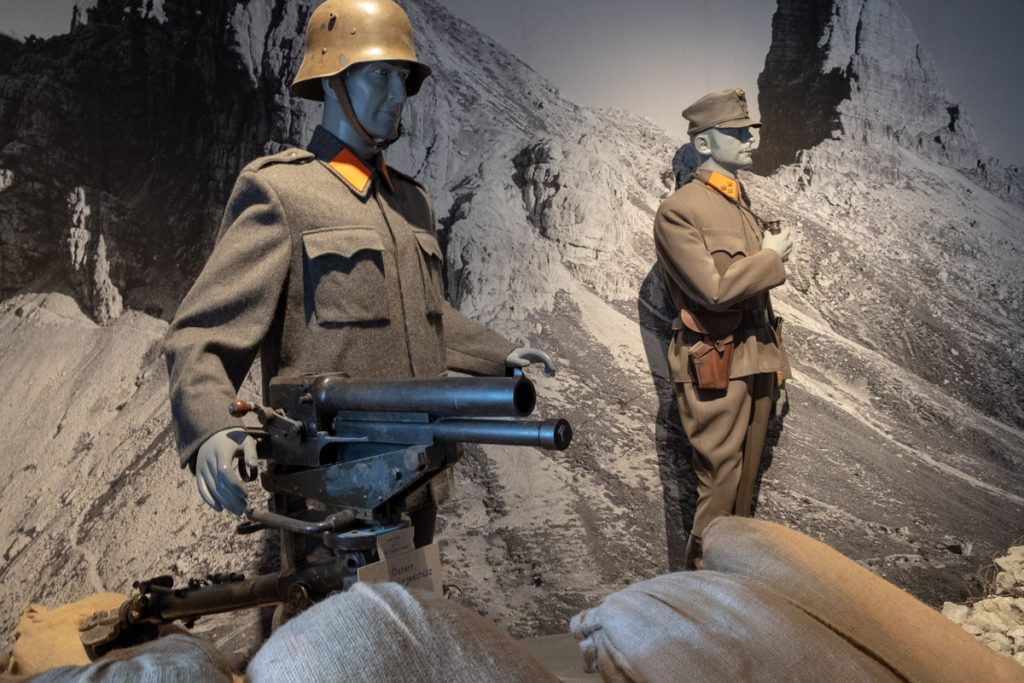 I wandered around the courtyard looking in the chapel and some other buildings before heading on a tour of another building. 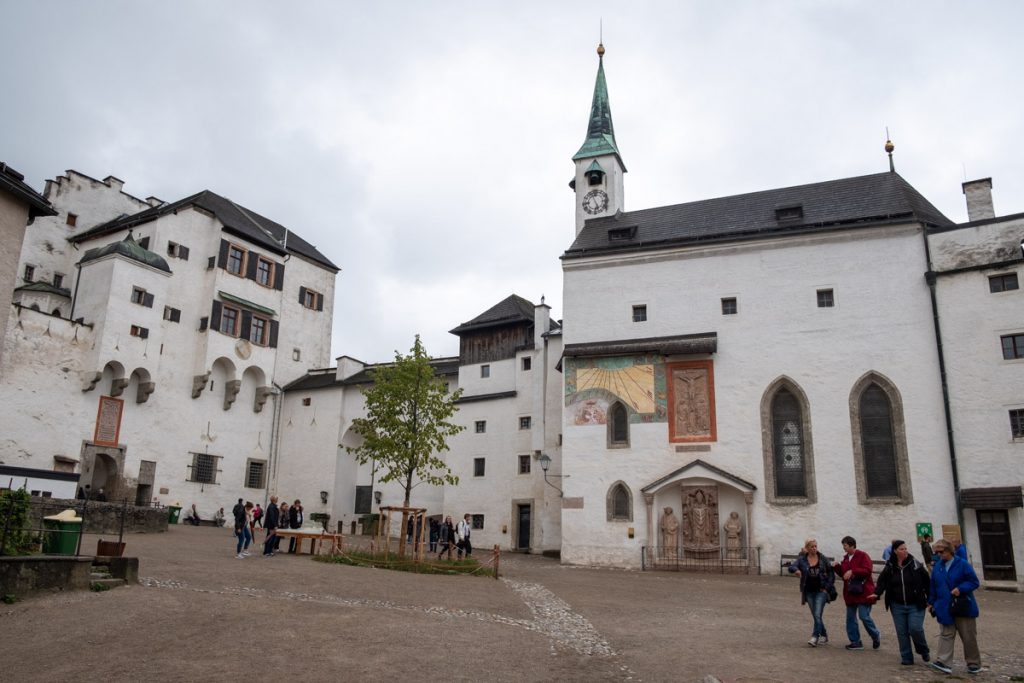 This tour starts in an old tower that contained the dungeon.  The thing about the real dungeons I’ve seen is they aren’t like most of the movies portray them.  They are a small hole in the floor where prisoners were lowered down into a large pit below the castle. 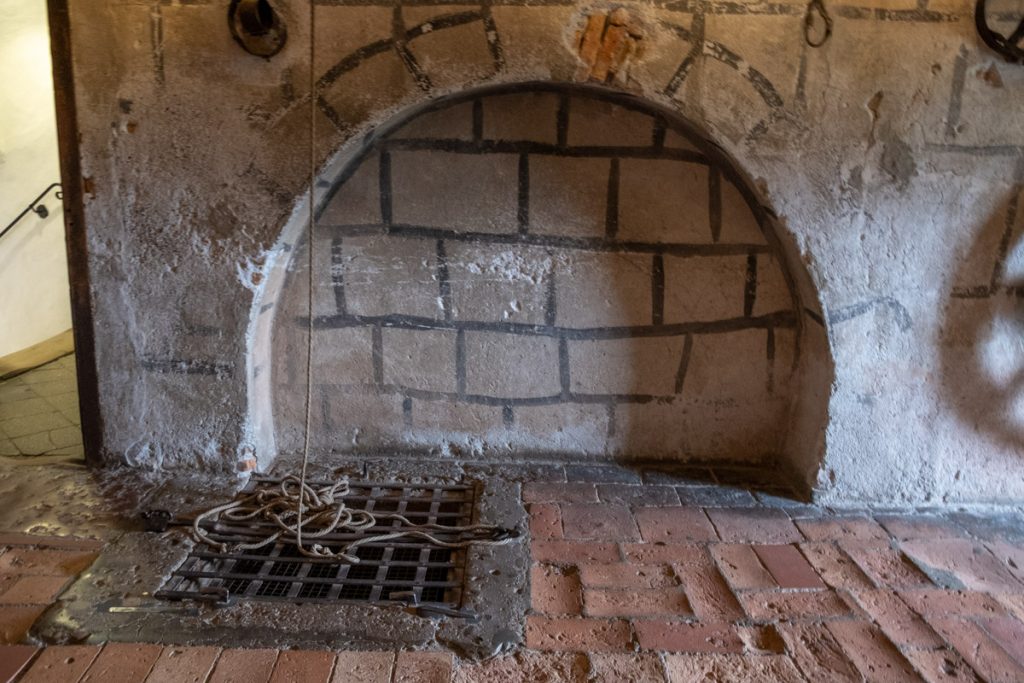 The tour ends at a viewing platform at the top of one of the towers with even more great views of the countryside.  I can imagine it’s beautiful on a sunny day.  For me it felt like I was taking pictures from the clouds. 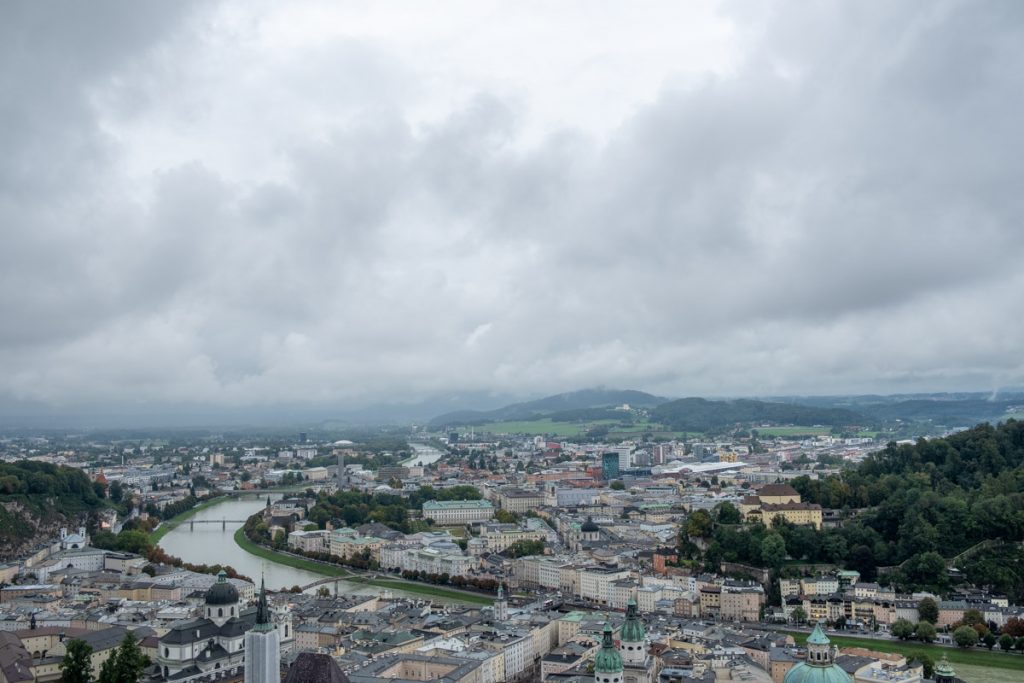 This fortress is one of the largest in Europe, and I spent several hours looking around, including the tours.  They say Prague Castle is the largest, but this one felt bigger to me.  That’s probably because you are allowed to visit almost the entire place.  I spent a little more time wandering around the walls before deciding to head out. 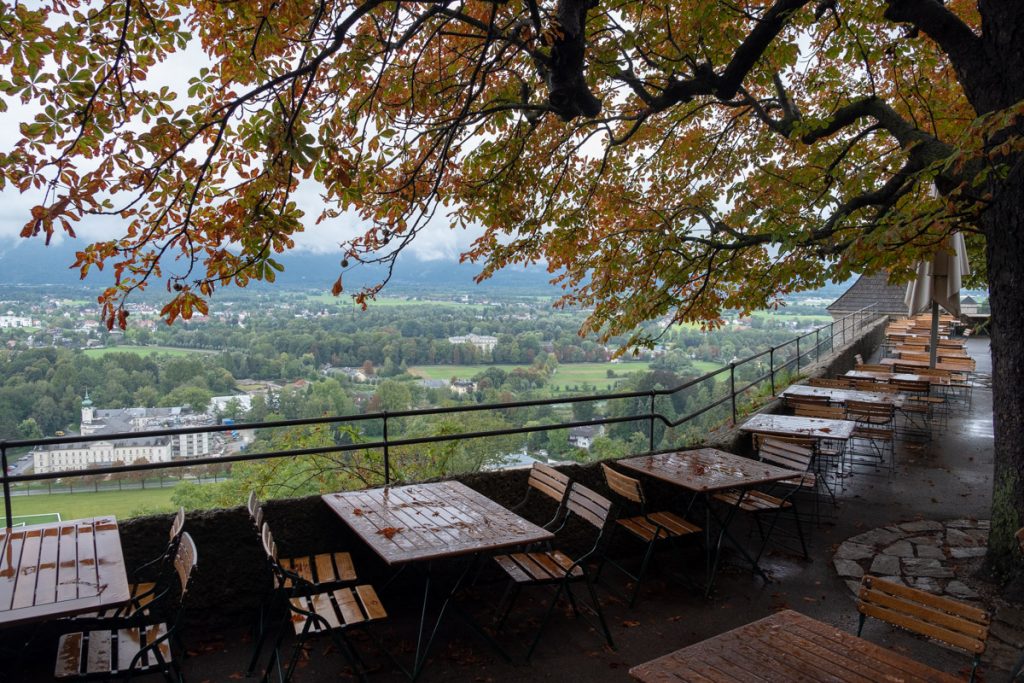 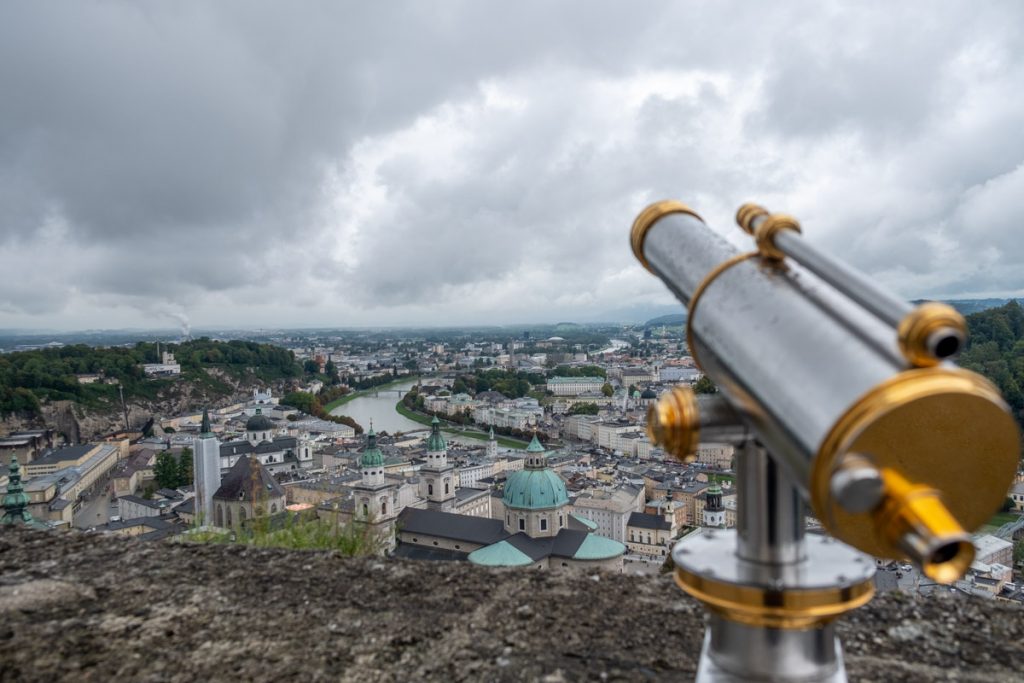 After coming back down to the ground floor, I took another walk through St. Peter’s on my way back into town. 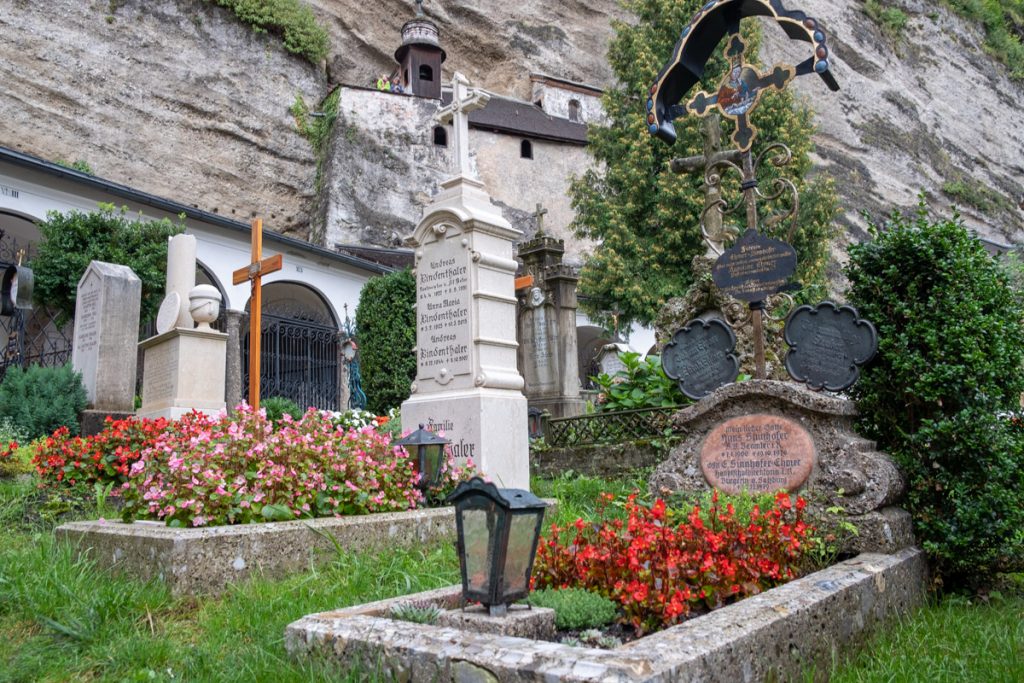 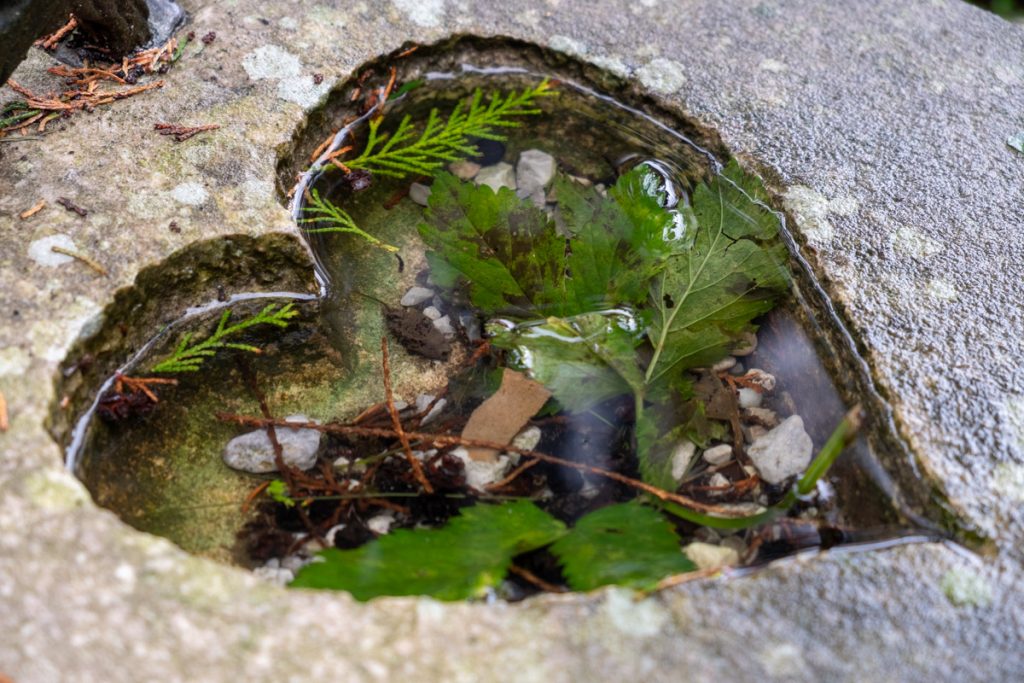 On my way to my next destination I came across this interesting statue on the grounds of the University.  It seemed to blend in with the building behind it. 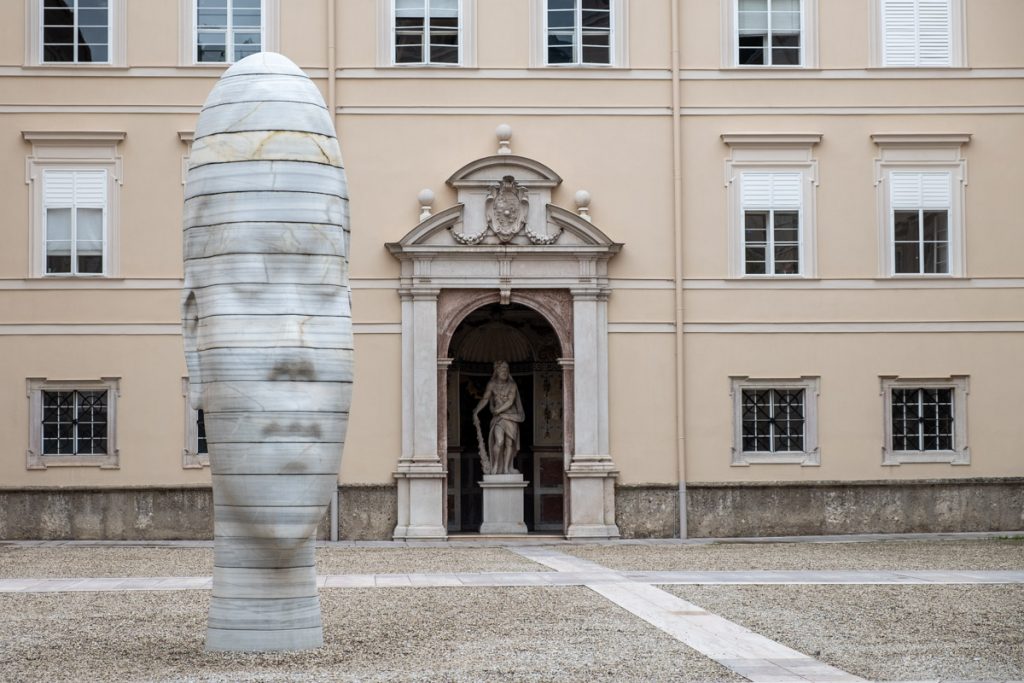 The last sight on my itinerary for the day was the Salzburg Museum.  There were a couple rooms that were interesting, but for the most part nothing special that really got my attention. In hindsight I probably should have visited the Museum Moderne instead.  That being said, it was still a nice way to spend an hour. 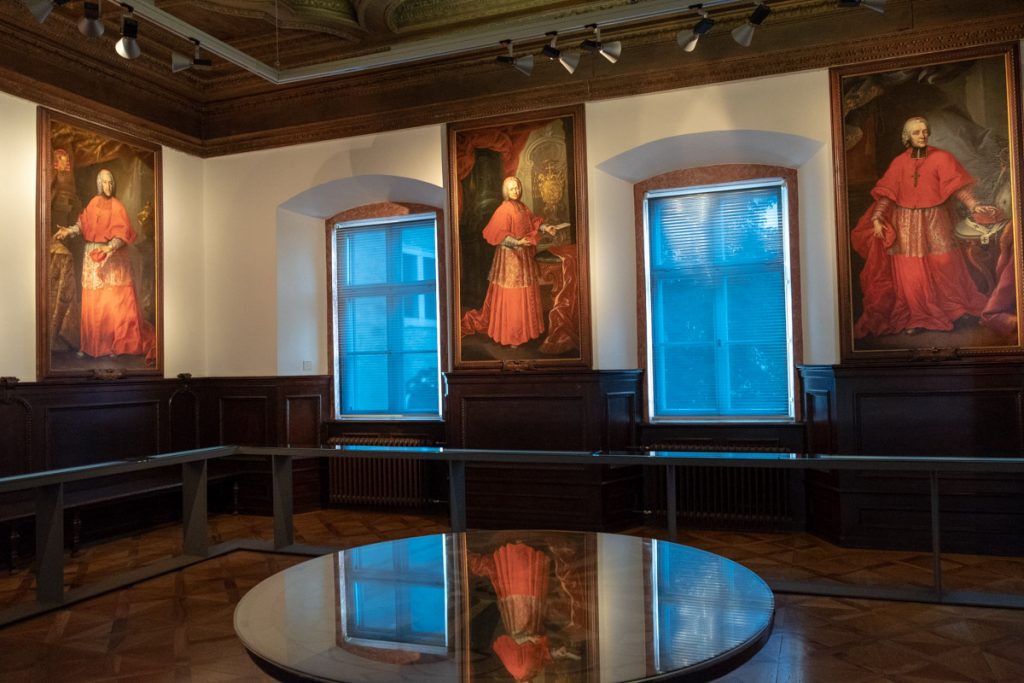 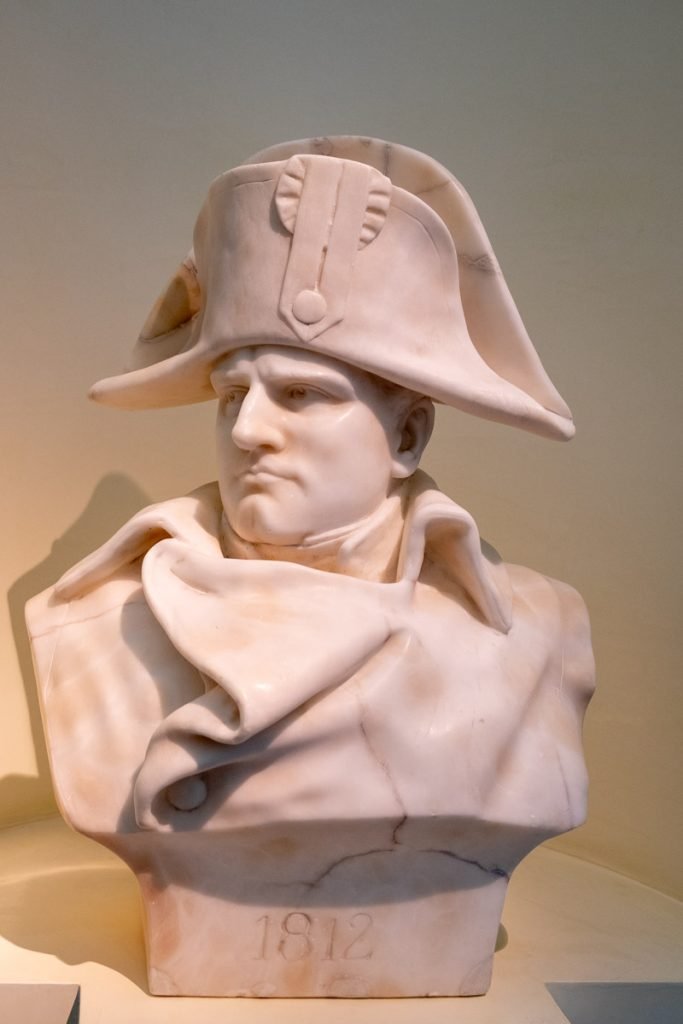 I closed out the afternoon with some fine dining from the local street meat vendor and shopping for the latest Austrian fashion. 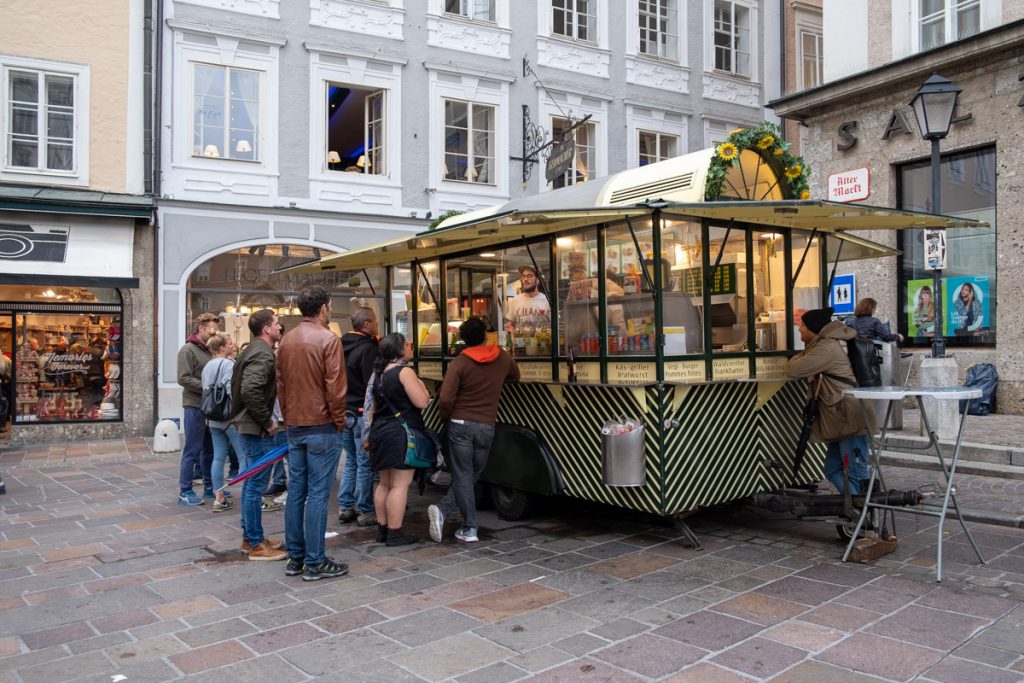 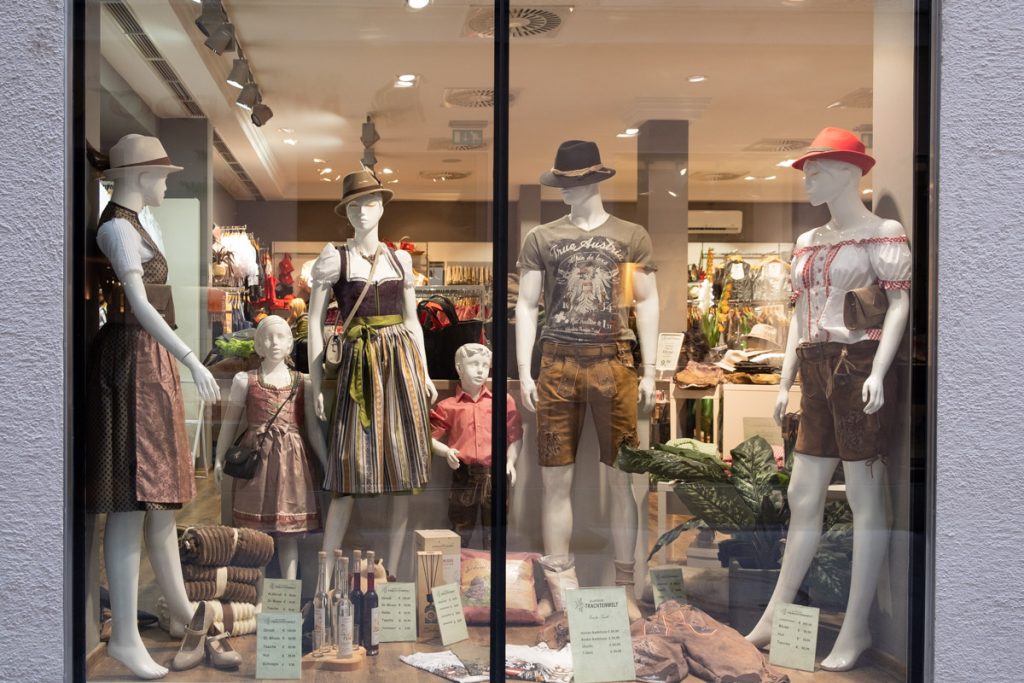 That was it for Salzburg.  I had an early train to Munich the next day to catch my flight to Florence.

So long, farewell. Till next time.