Salzburg In The Rain

As my train neared Salzburg I could see the sky begin to darken and a few lone drops of rain began to streak off my window.  By the time I got to the station it was a full on down pour.  I was planning to walk to my hotel as it is only 10 minutes away on foot, but in this rain I decided to try some public transport.  I quickly consulted my guide book and headed out to the bus platform.

Buses have been my Achilles heel when it comes to public transport, I’ve yet to successfully figure them out.  I talk to an attendant and get a suggested bus to get on.  My gut was telling me this wasn’t going to work and I had the maps app on my phone tracking my progress as soon as we left the station.  Sure enough, I was heading south when I should of been heading east.  I get off at the first stop and decide to just walk in the rain. Fortunately I packed a rain jacket.  8 minutes later I’m at the hotel, a little soggier than planned.

The hotel is in a good location, right on the river, and a 15 minute walk into the main town.  I forgot I actually booked a full sized room this time and reveled in the extra space. 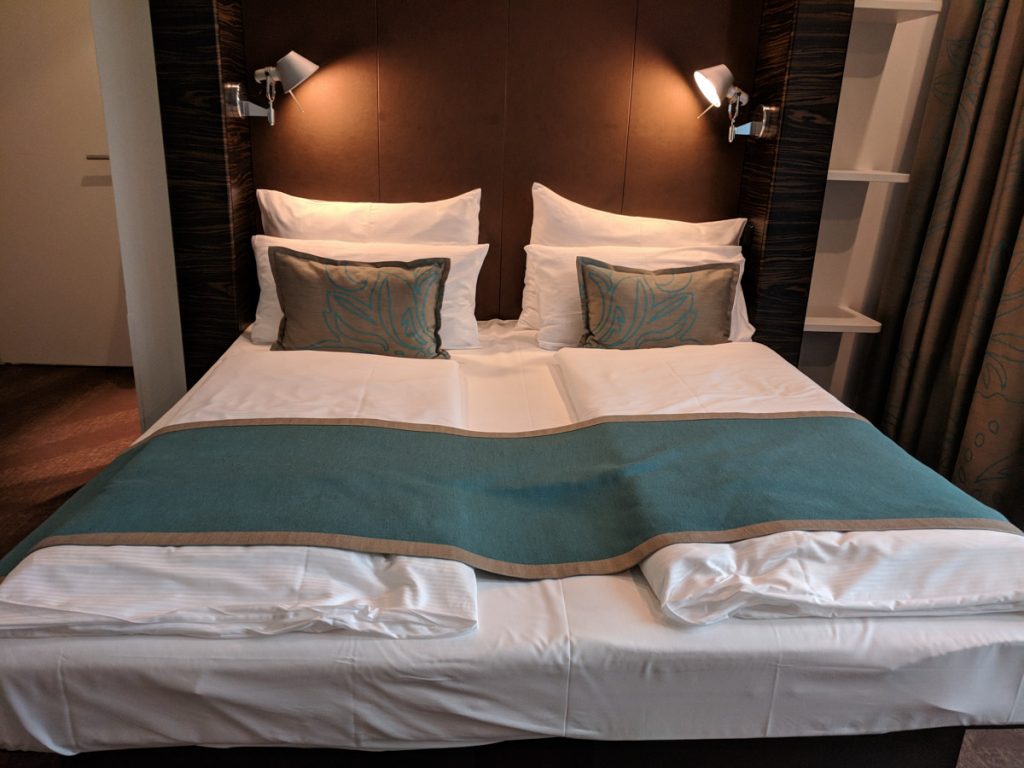 Checking the weather app, things did not look good for my time in Salzburg.  I only had two full days in the city, one of which I planned to do a side trip to the Berchtesgaden and Eagles Nest across the border in Germany.  But it looked like it would be raining most of the time.  So I adjusted my schedule to try and see the sights between the down pours.

The first day I decided to take a wander around town and check things out before pulling out my guide book.

Mirabell Palace was on the way from my hotel to town, so I stopped in to have a look around the gardens.  There was an event going on inside, so I just stuck my head in for a quick peak.  And for those of you closet The Sound of Music fans out there, these gardens were in a couple of scenes. 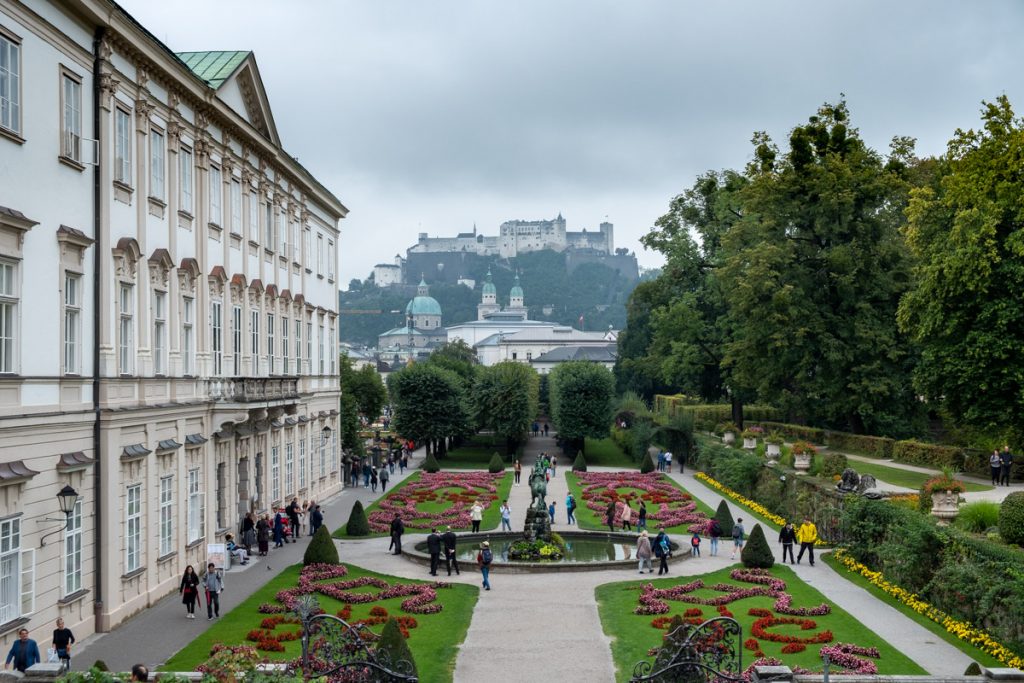 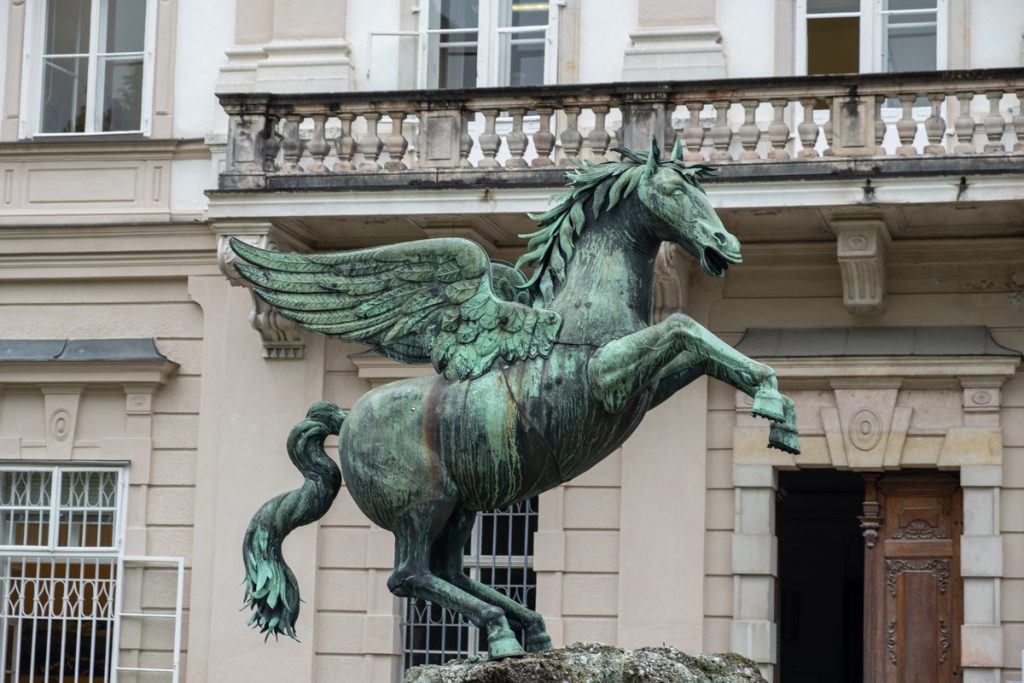 After having a good look around, I continued on into town.  It’s hard to miss the giant castle perched on top of the hill, so I just kept walking along the river in that direction till I found the main bridge leading into town.  The bridge is easy to spot as it is adorned with “love locks” from one side of the river to the other. 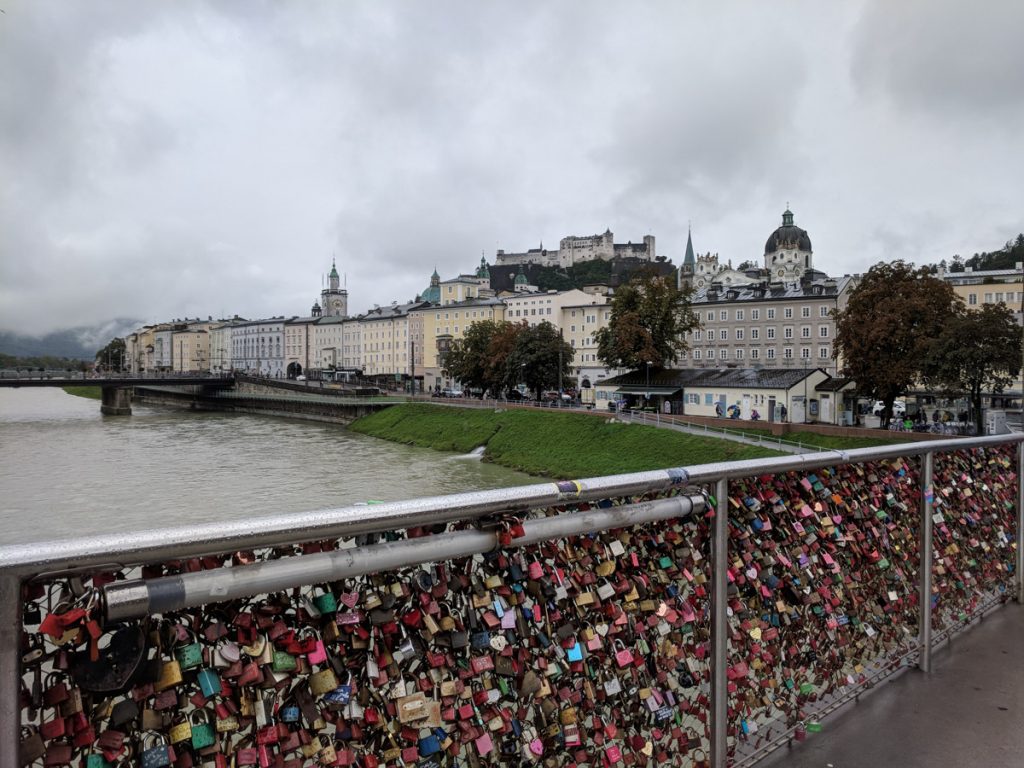 As I made my way through town towards the castle, I stumbled upon St. Peter’s Abbey, or more accurately the graveyard.  Another stop on my impromptu Sound of Music tour.  It has to be one of the most beautiful graveyards I’ve ever seen.  The tombstones and grave markers, set against the sheer rock cliff drew me inside the gates.

The Abbey and graveyard have been there since roughly 700 A.D.  And it has been in continuous operation till today. 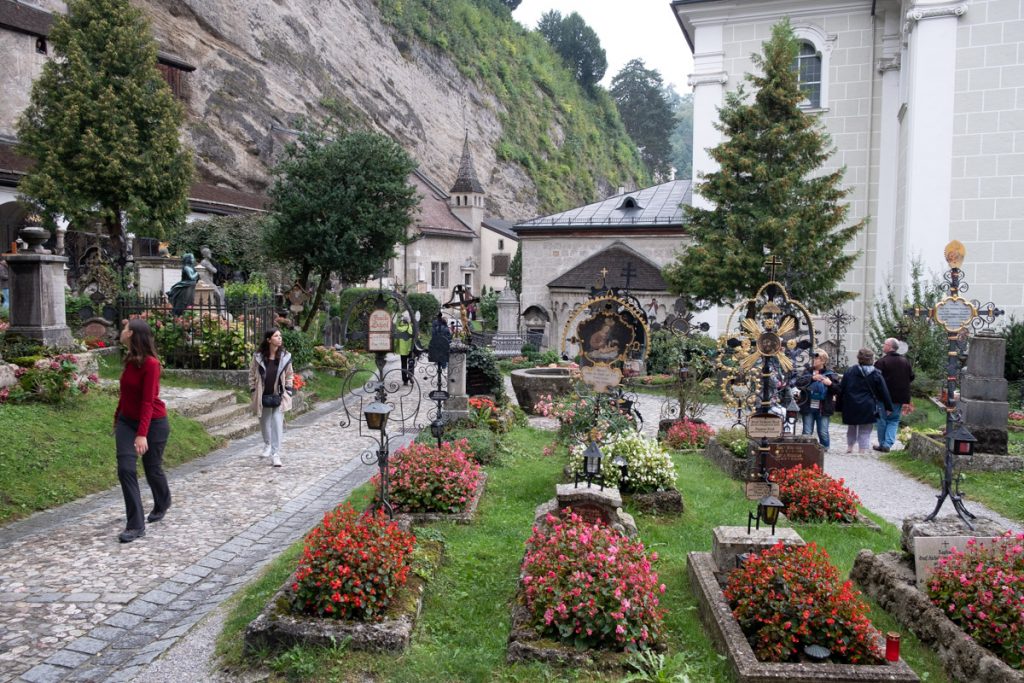 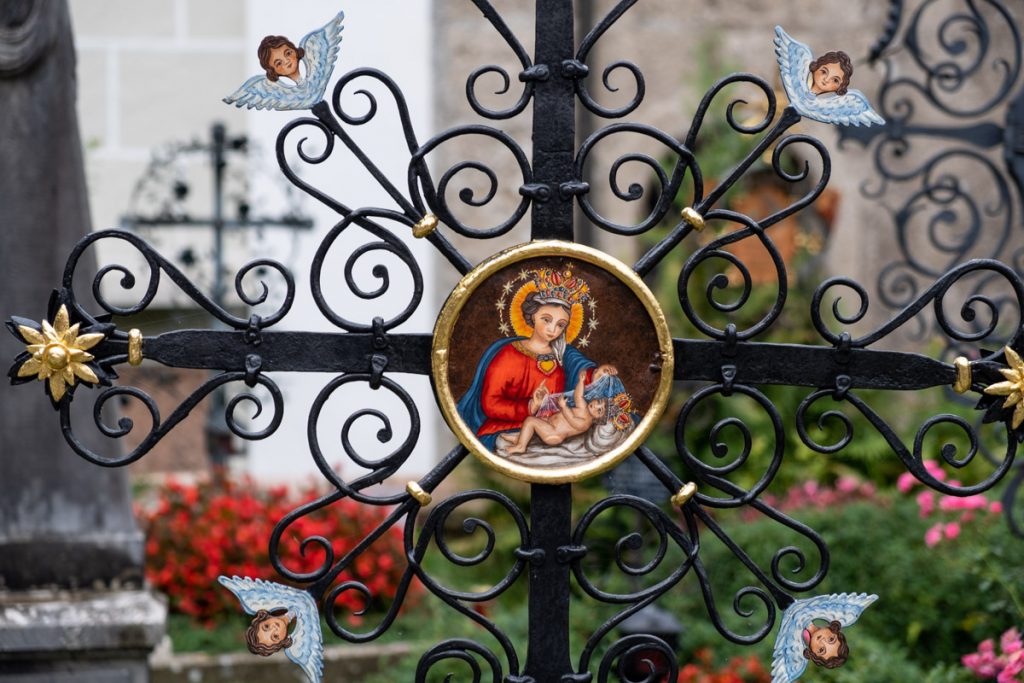 As I was strolling around I saw people pop their heads out of what looked like a building built onto the side of the cliff face.  I wanted to go check that out too, so I looked around for an entrance. 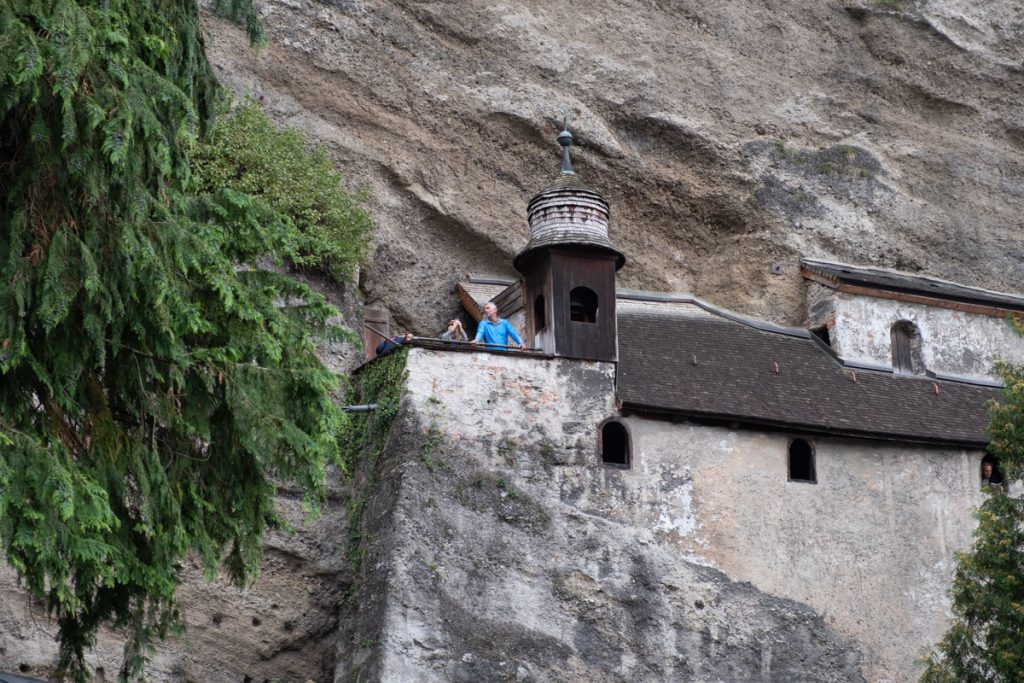 I found the entrance which turned out to be for the ancient Christian Catacombs.  Built here long before the Abbey.  For 2 Euro I could go up and take a look for myself.  I climb a steep set of stairs which opens into a small alcove and two adjoining rooms carved out of the rock.  One was a fairly good size church. 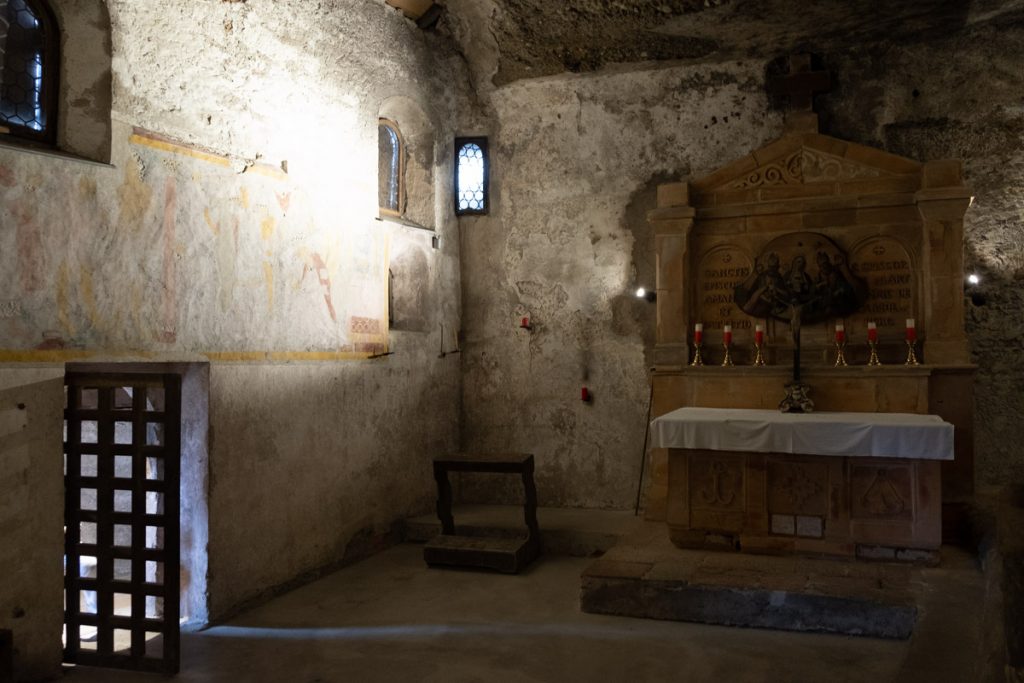 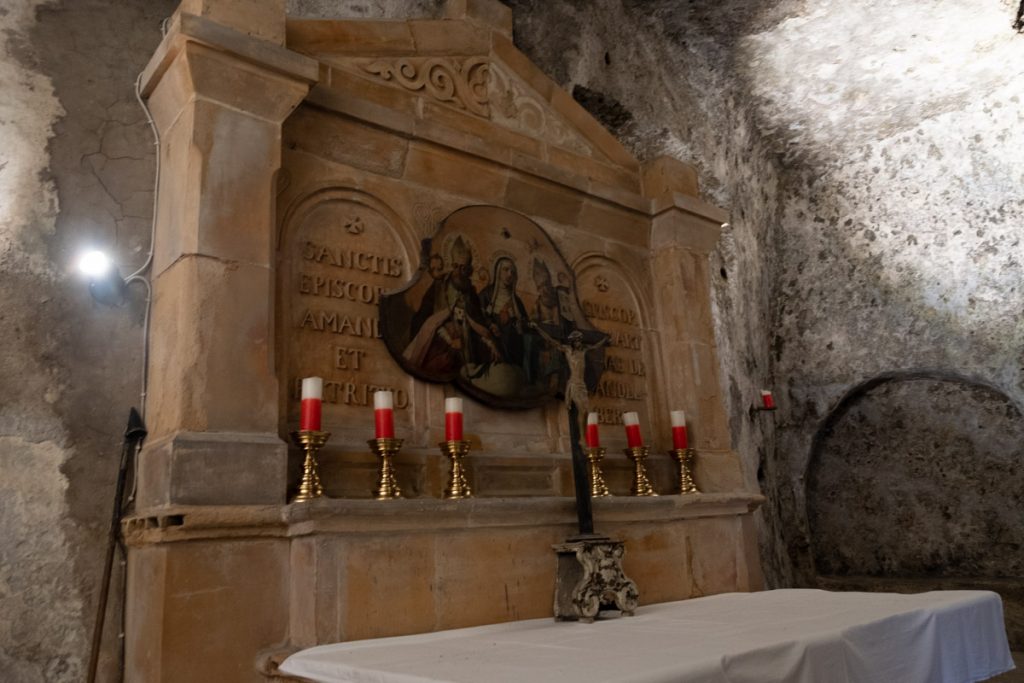 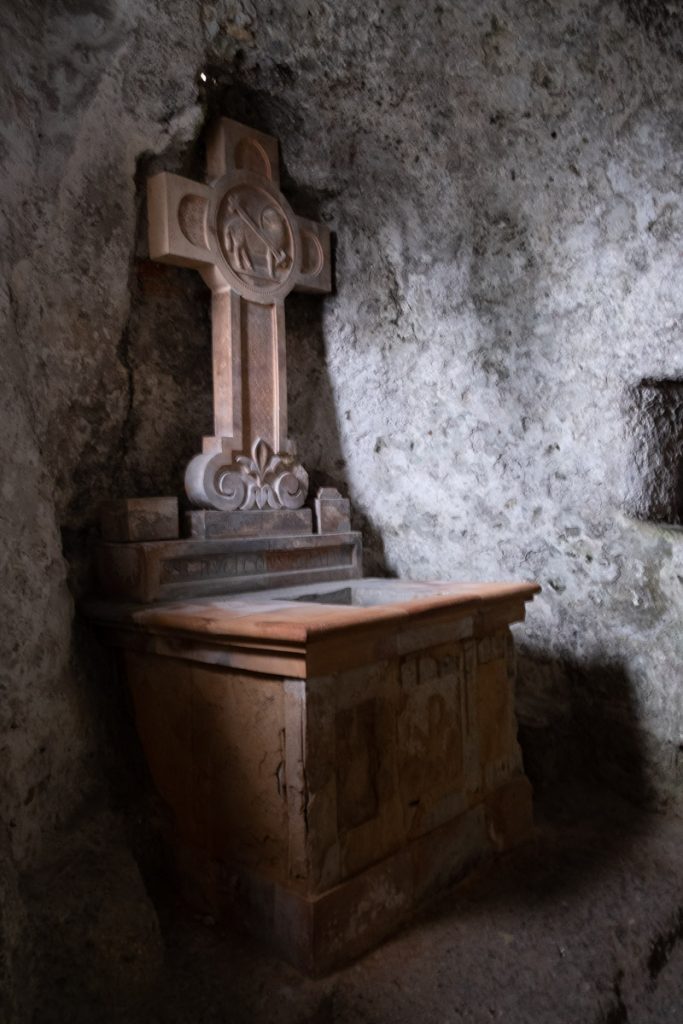 The overlook gives some nice views of the cemetery and surrounds. 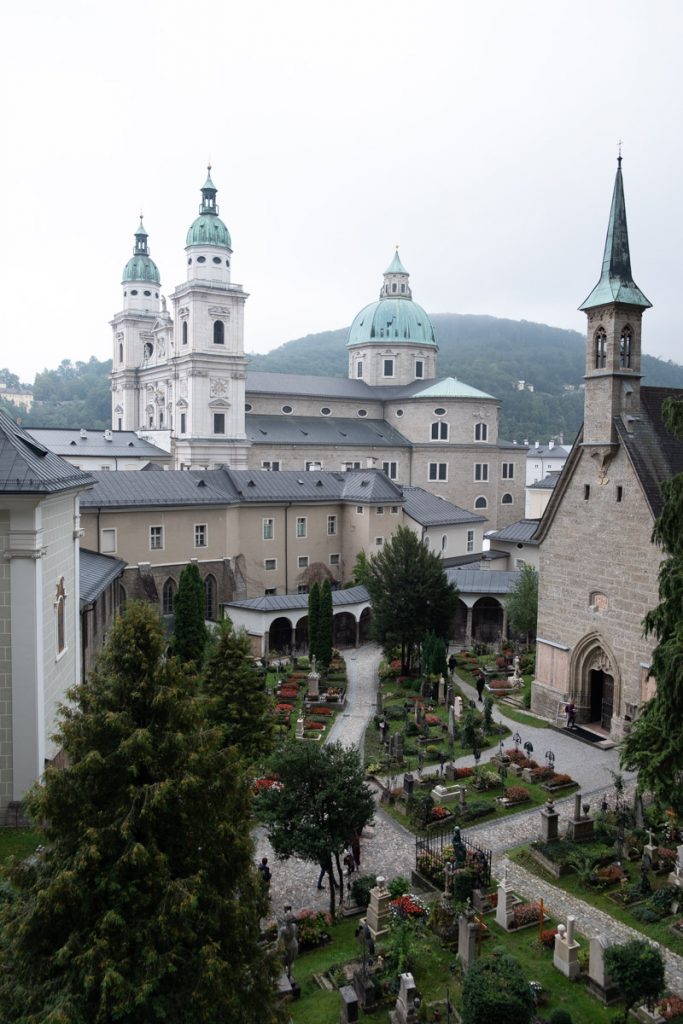 I continue my wander around town, making my way through the winding streets.  The sky starts to open and the rain begins to fall.  I head back to the hotel, which is a good 25 minute walk from where I was and barely make it back before it really starts coming down. 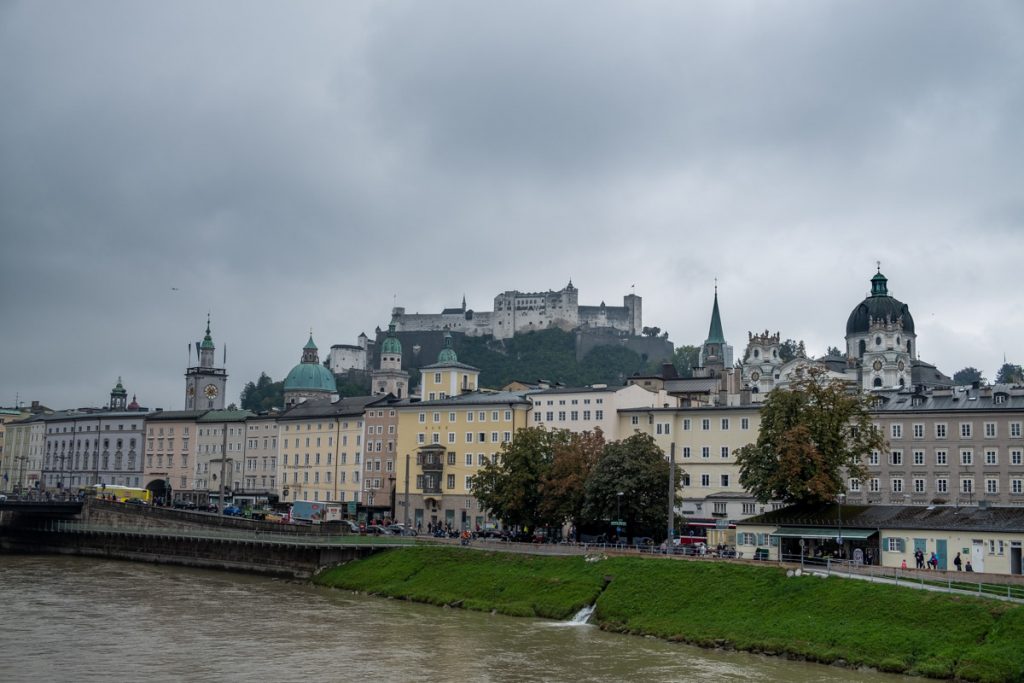 Of course I needed to go out and try some more Austrian food and beer.  The pork medallions in mushroom sauce was excellent, as was the Stiegl, a local Salzburg brew. 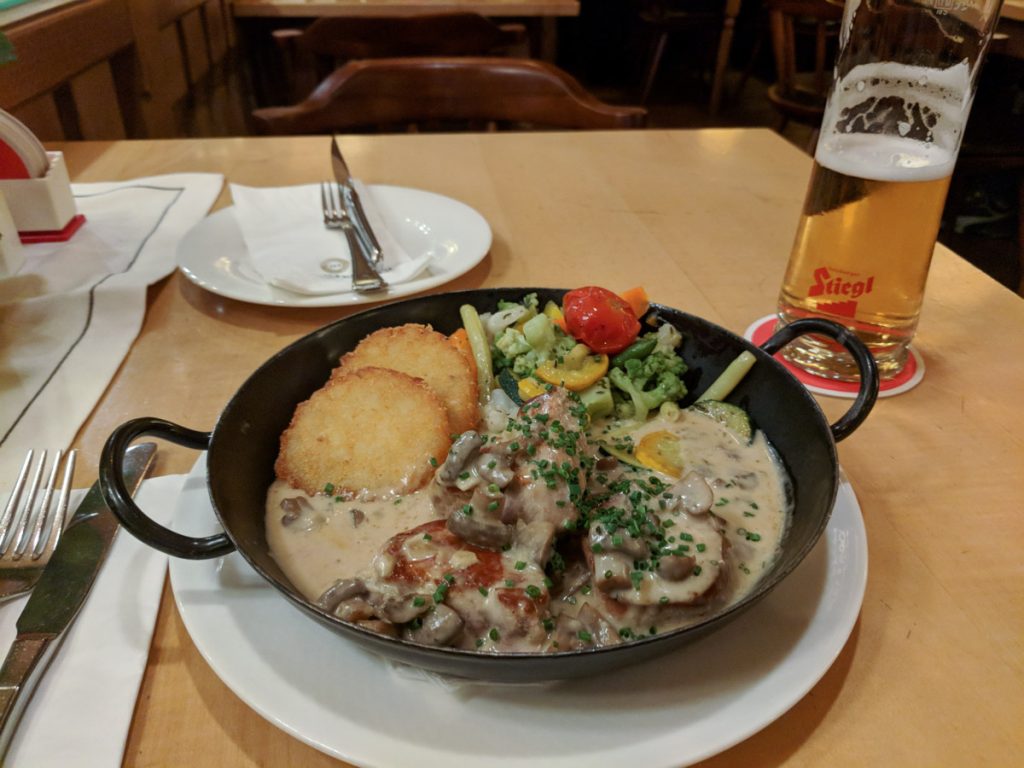 A pretty lazy but enjoyable first day in Salzburg, despite the rain.  On the following day I visit the castle (amazing), the Salzburg Museum- which I’ll have an update on next.

Thanks for stopping by today.  I hope you are enjoying the updates from the road.

2 thoughts on “Salzburg In The Rain”