Seville City Walk And The Alcazar

My losing streak with buses may finally be over.  I took two buses in one day without getting off at the wrong stop or getting on one going in the wrong direction. I’m feeling proud.

I departed from Granada the way I came in, by bus.  You catch the bus from the train station which is still in hibernation, awaiting the new high speed train to make it’s first arrival. 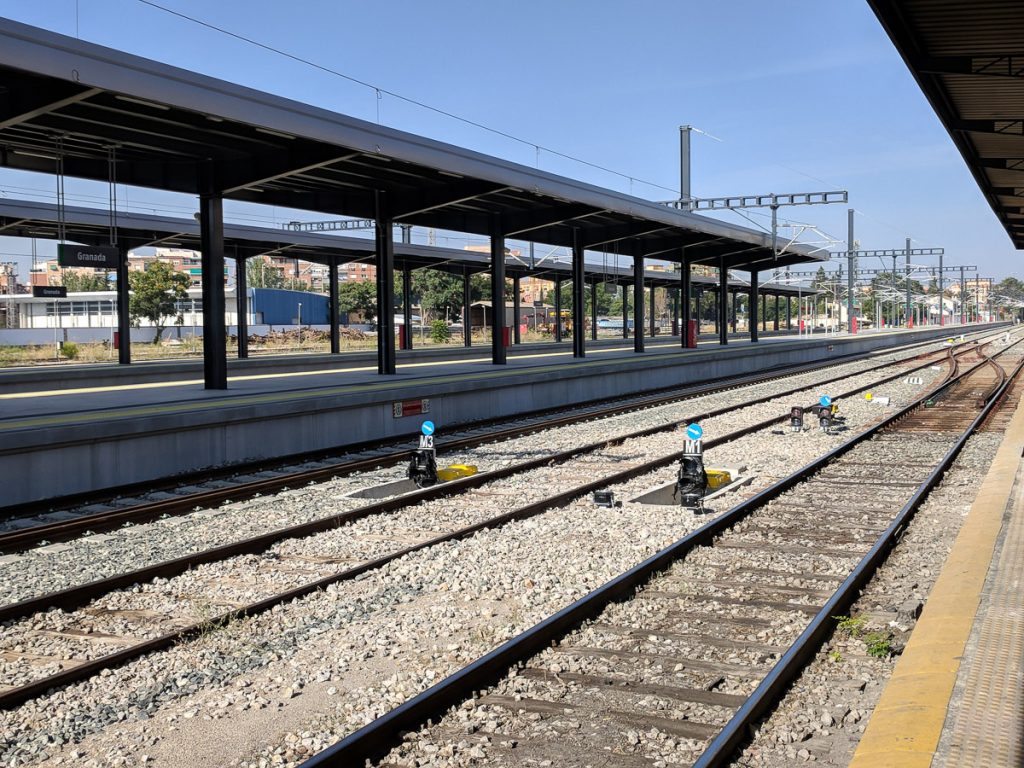 I arrive in Seville mid-afternoon and after checking into the hotel I take my now obligatory wander about town to check things out.

I only have one full day in Seville to see all the sights.  It is a small city, so it’s doable if you make a full day of it.  I set out the next day to see the Alcazar first as that is the main attraction and the reason for my visit.  I get a late start and the line for tickets is quite long, wrapping around the building.  In Rome I found that going in the afternoon meant smaller lines and less crowds.  I hoped the same would be true in Spain as I chose to forgo waiting in line to try to see some of the less popular sights.

I roughly follow the city walk from the guide book as I snake my way through the narrow streets and small plazas. 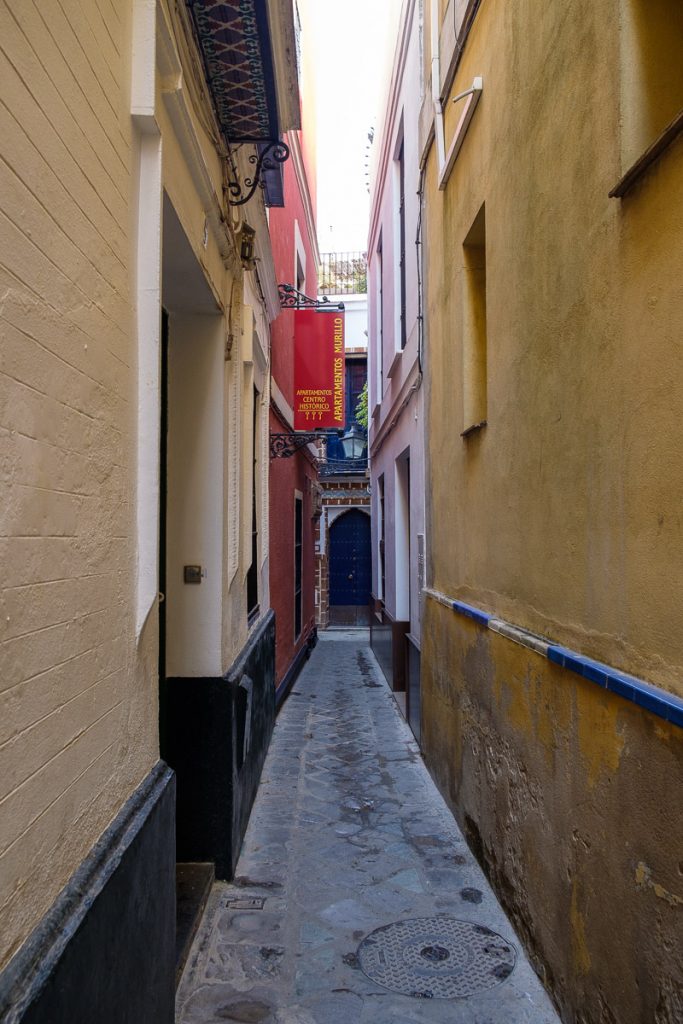 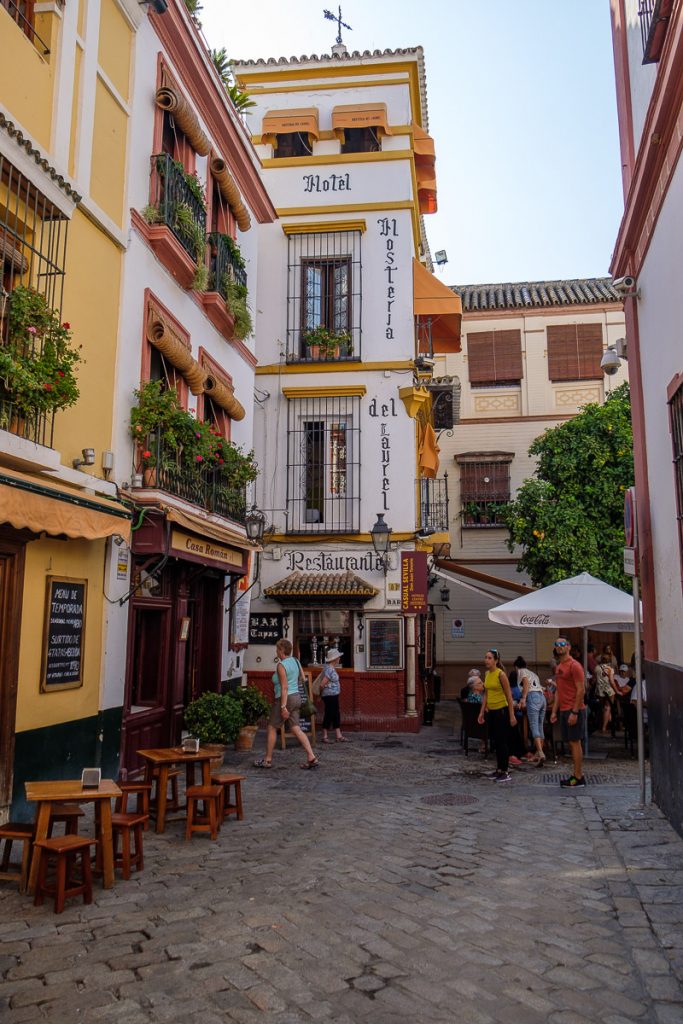 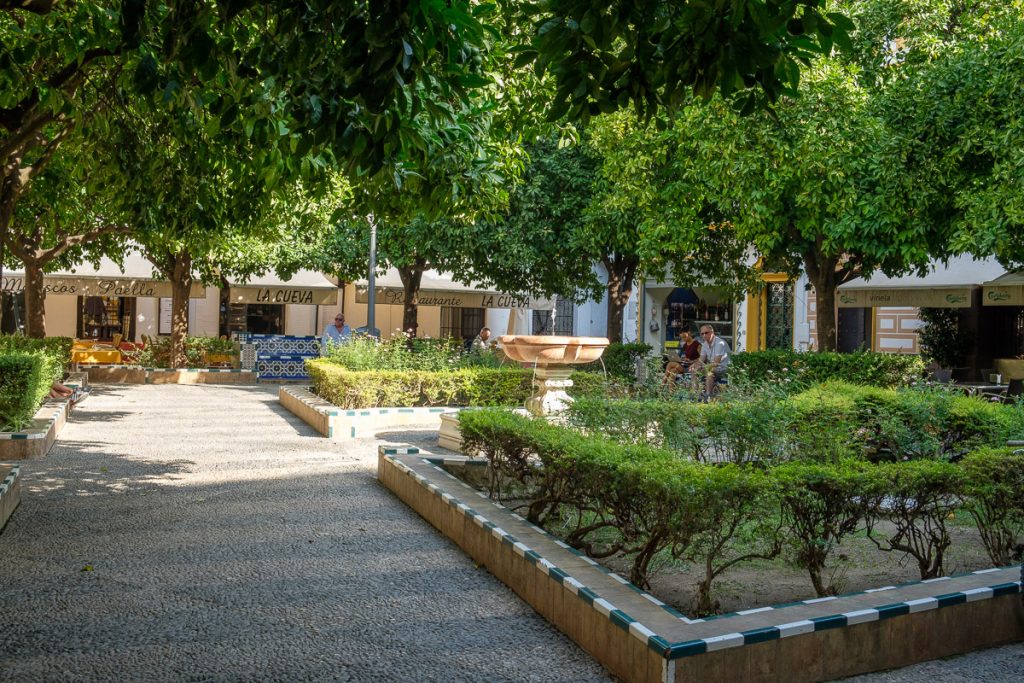 The walk takes me through the old Jewish quarter and along the fortified city walls before I emerge near where I started at the cathedral and large open plaza of the city center. 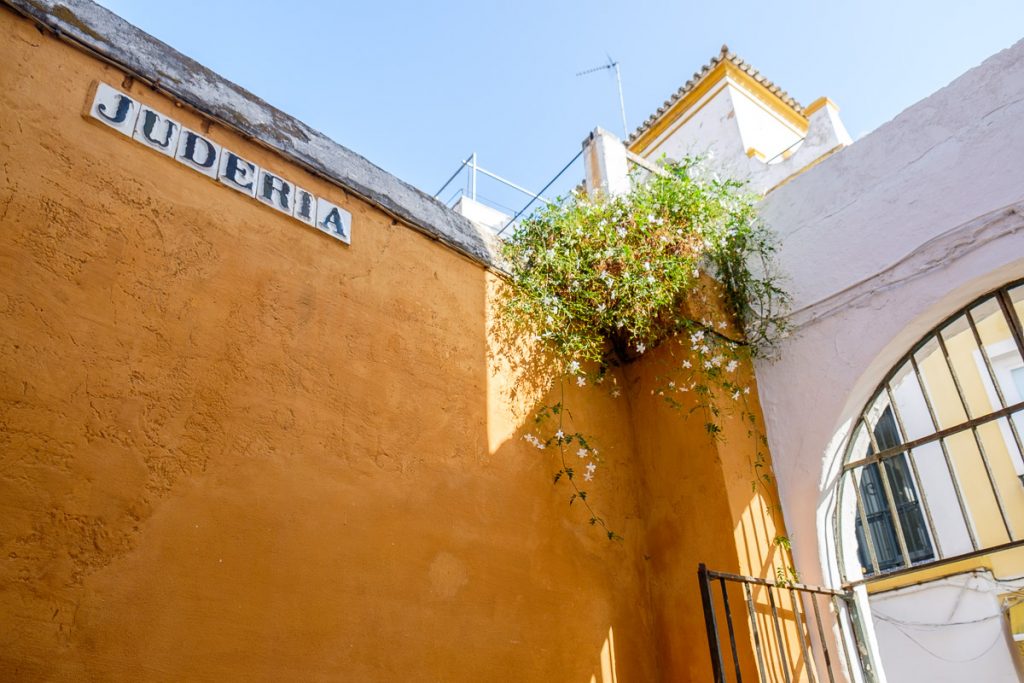 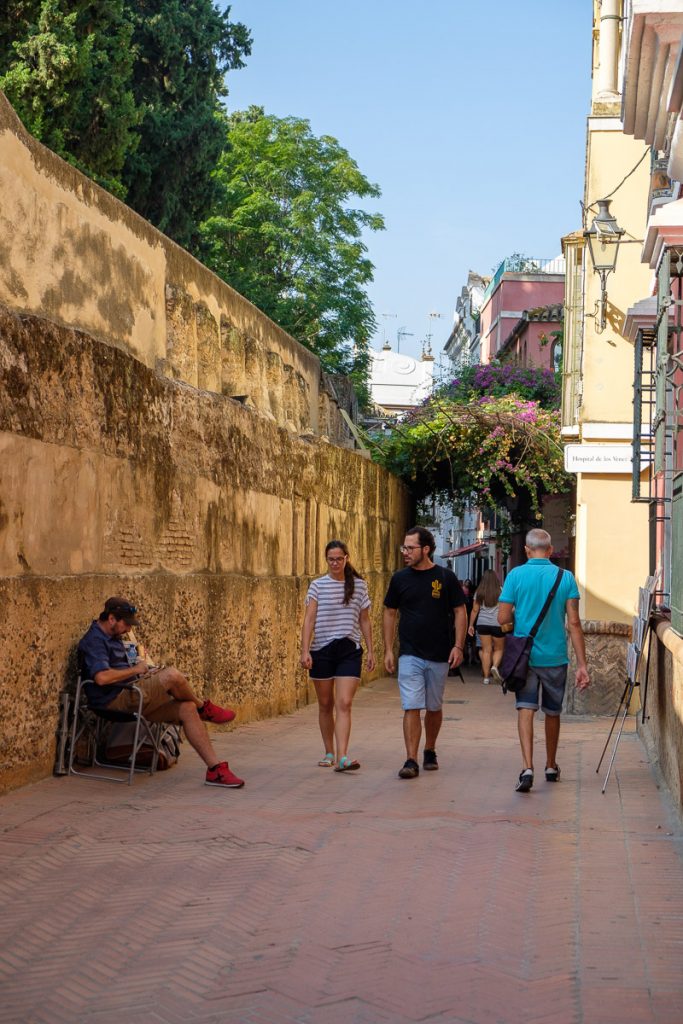 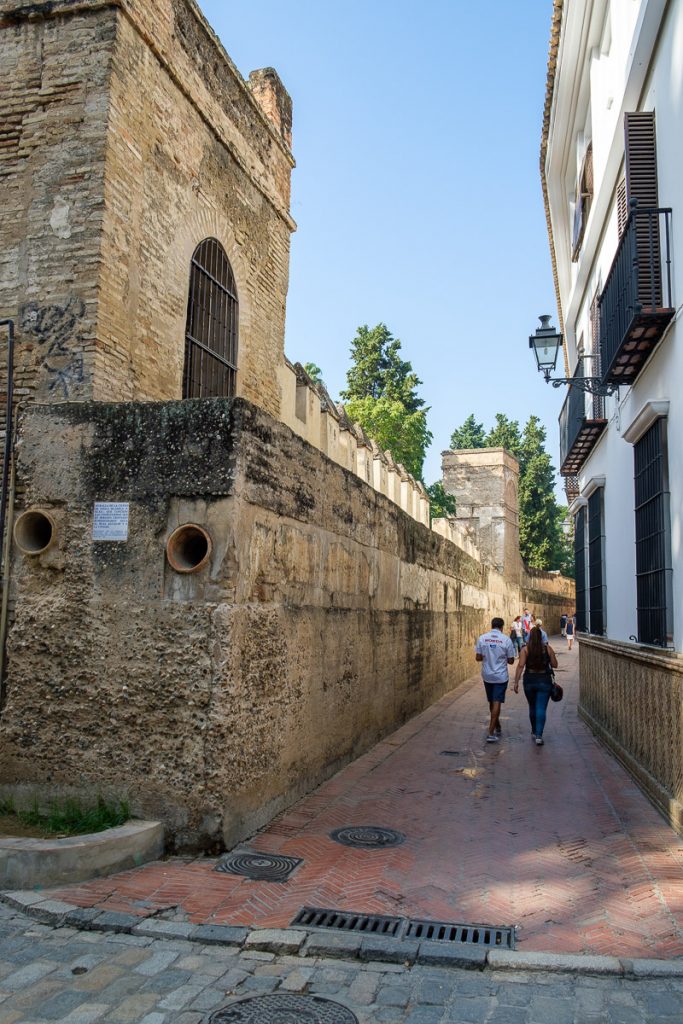 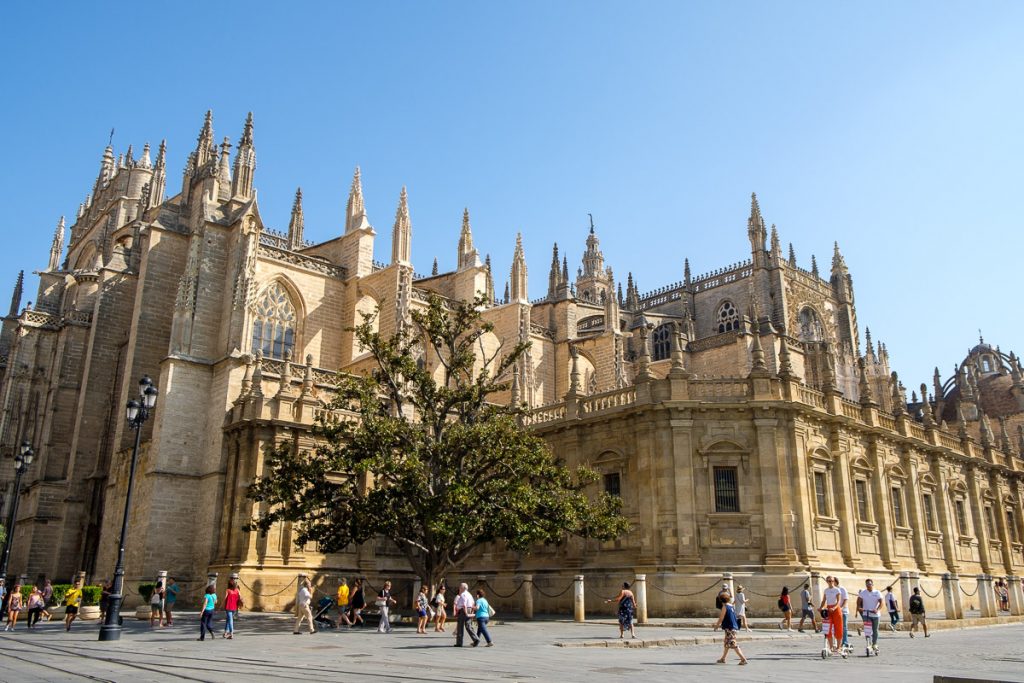 As I head towards the river I come across a movie being filmed.  I didn’t recognize any of the actors so I’m not sure if I’ll ever see the movie, but I walked back and forth hoping I’ll make it in as an extra.  I’m going to be rich from my royalties if this movie hits it big.

I walked along the bridge and river bank taking photos as I went. 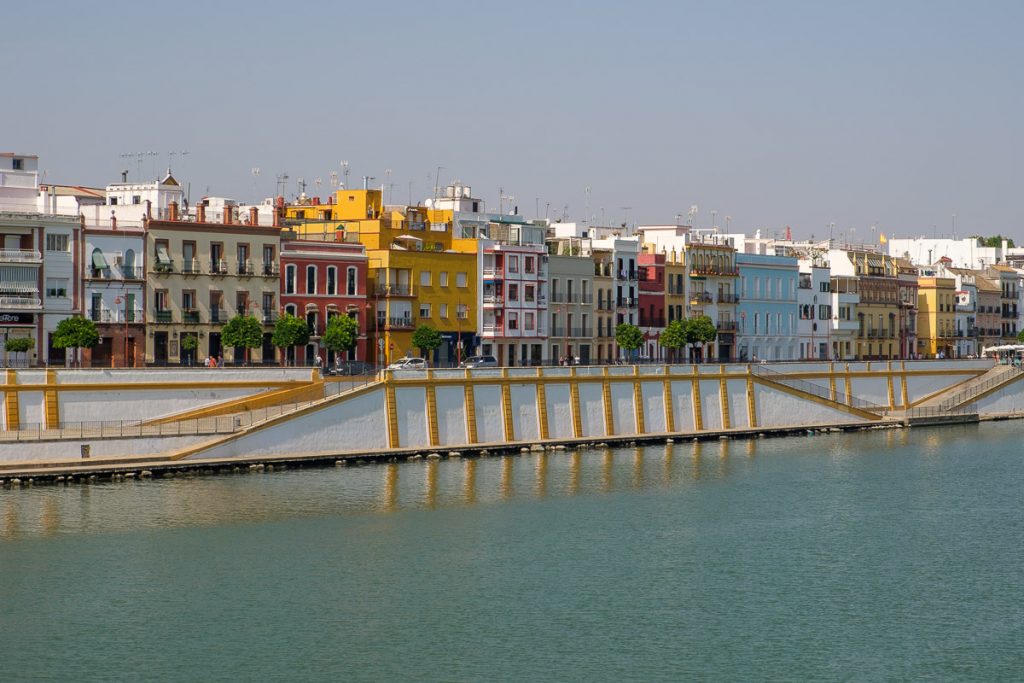 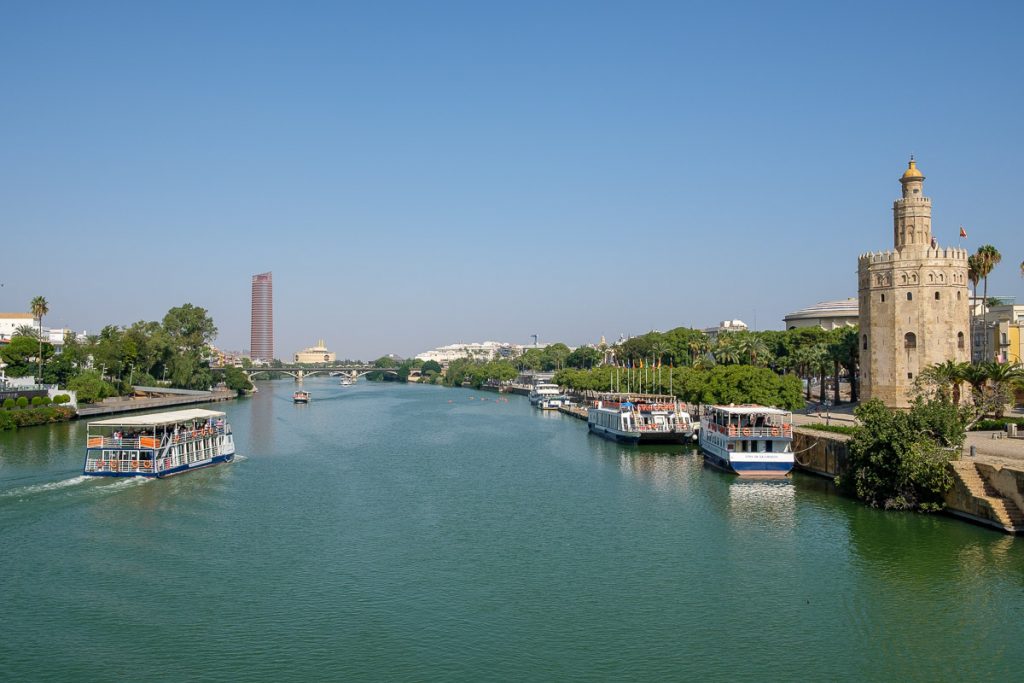 Seville’s historic bullring is on the river so I popped in to see if I could take the tour.  The line was long and not moving.  I was cooking in the Spanish sun waiting for my turn and I soon lost interest and decided to continue my walk. 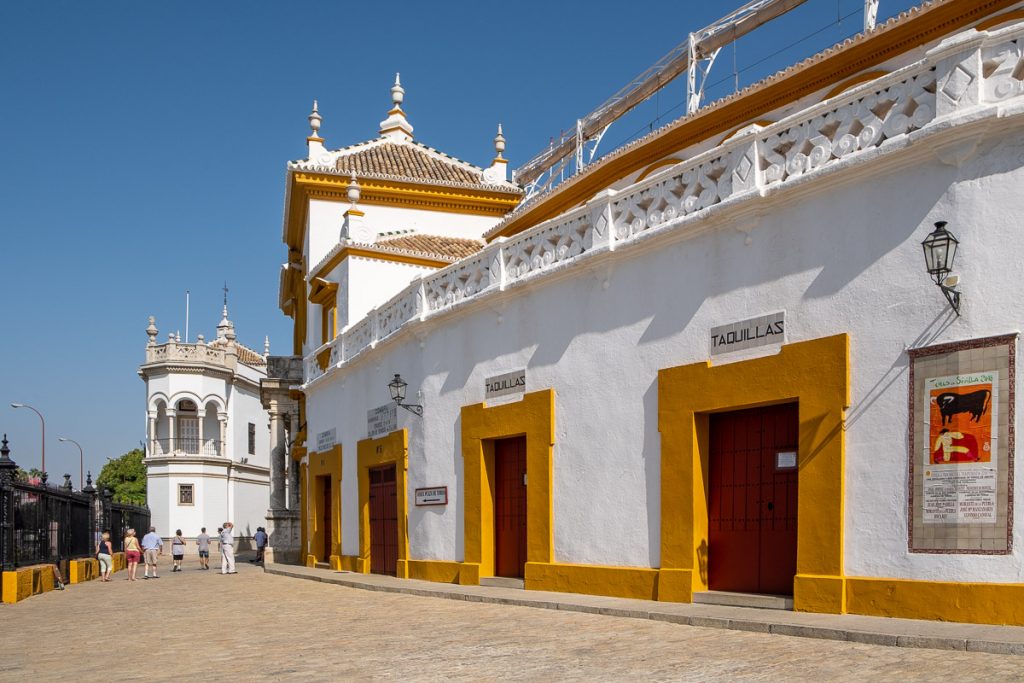 I broke for lunch before heading back to the Alcazar to try my luck again.  The line had shrunk to half it’s size so I took my spot at the back.  It’s mid-September and the sun is sweltering in the south of Spain.  They are only letting groups of people in about every 10 minutes, so it’s a hot and sweaty wait before its’ my turn.

The girls in front of me are making waiting in line a team sport.  One goes to sit in the shade while the other two bake in the sun with me.  They rotate out to the shade as the line gets closer.  One makes a run across the street for water.  I wanted to join their team to take my spot in the shade, but I boiled alone.

I get my audio guide and map and head inside.  The guide is not great.  I head to one room as the audio plays, as I look around it doesn’t match up.  I head back out in the courtyard and across to another room, still nothing.  I’m not alone, I see others I came in with doing the same thing so I don’t feel like a complete idiot.  Eventually I find the right place to start the tour and I’m on my way.

The Alcazar was originally built for the Moorish Kings and still has many of the original design elements.  When the Christians expanded the palace later they brought in Moorish builders that kept the Moorish architecture for the new additions. 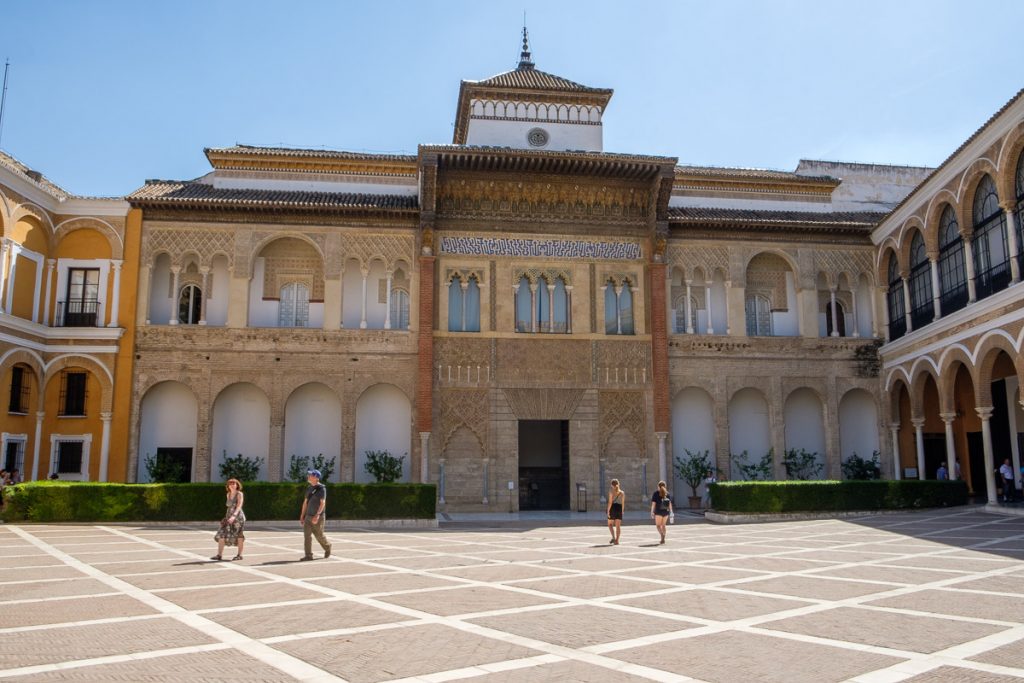 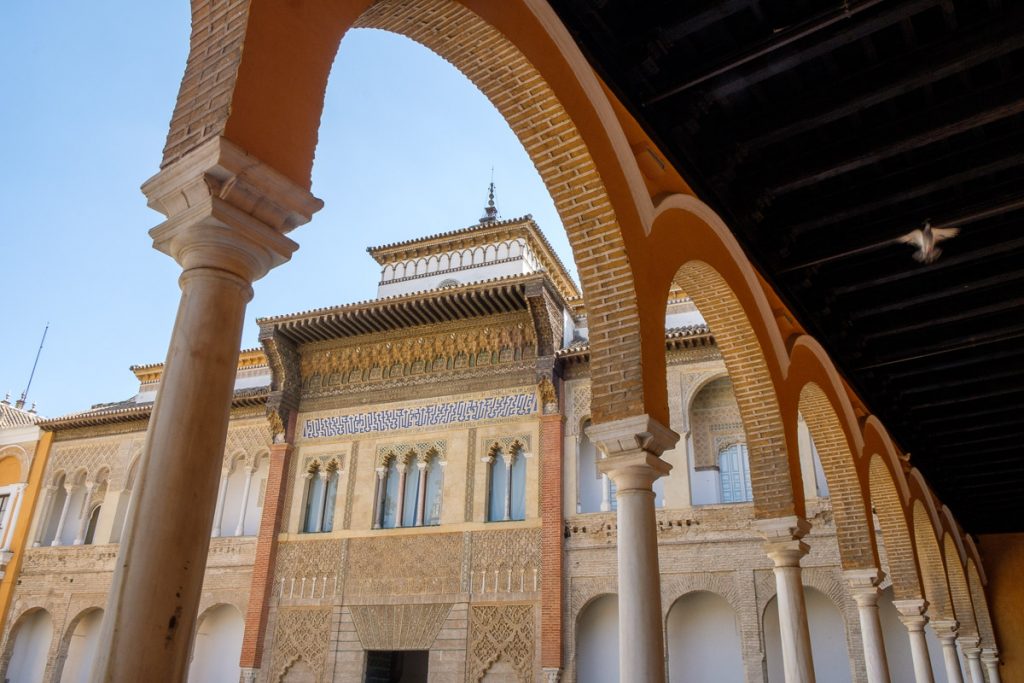 Far from the most beautiful of the rooms in the palace, the Hall of Admirals oozes history.  Great explorers like Christopher Columbus and Amerigo Vespucci once stood in this room, having an audience with the Monarchs.  Their names are still on the wall. 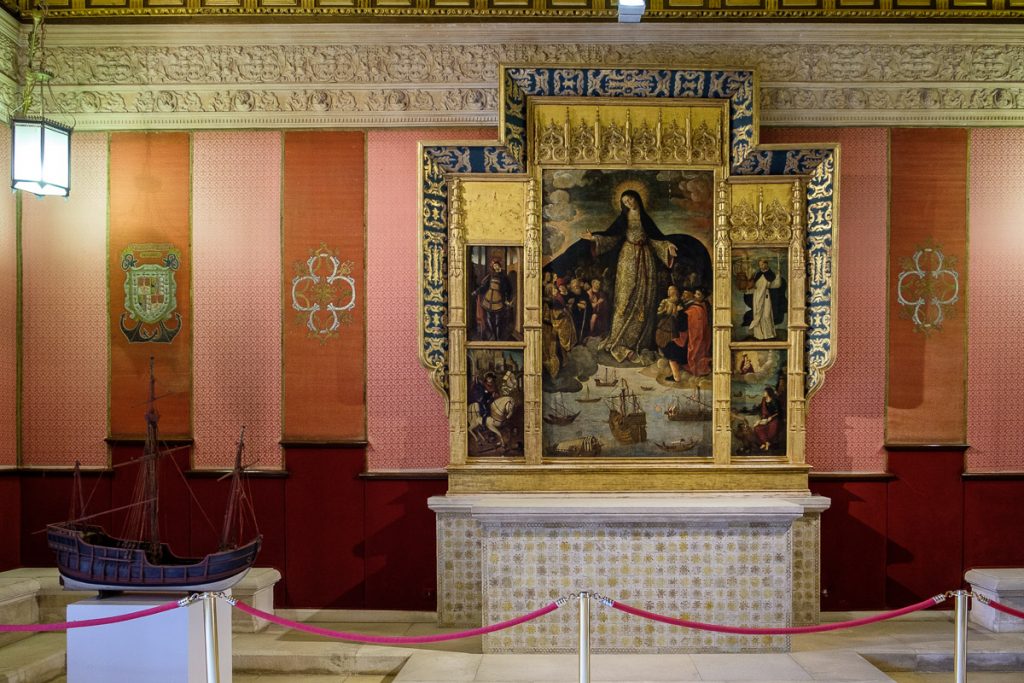 I took my time making my way through the palace, exploring the various rooms and courtyards. 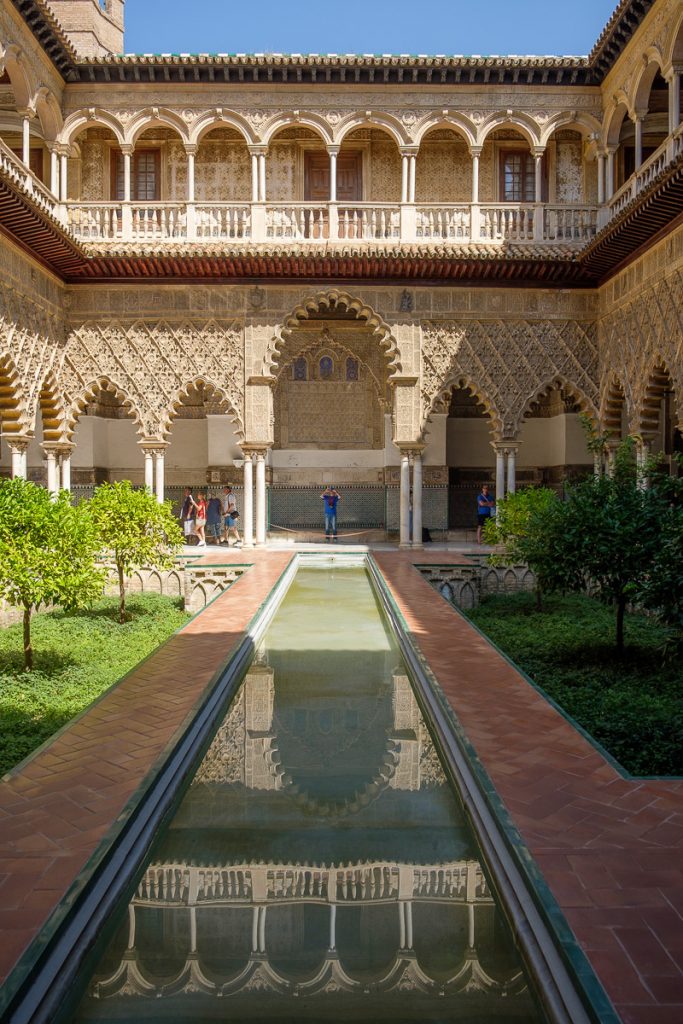 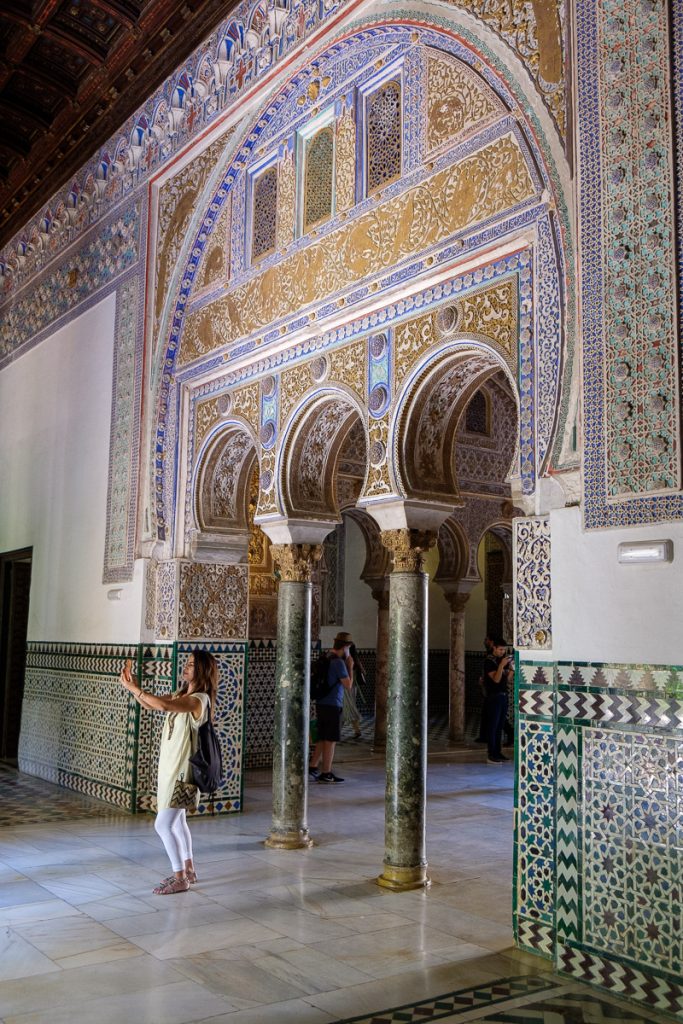 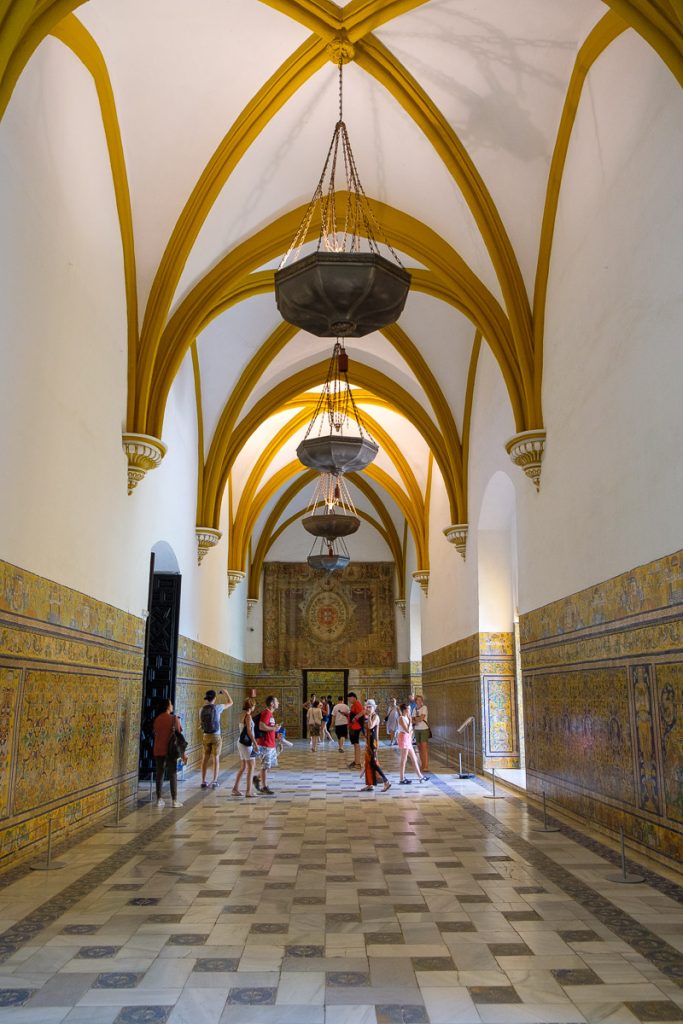 The tour ends at the gardens.  There is a nice garden inside the palace walls and expansive gardens on the outside.  I walked along the top of the wall that gives views to both. 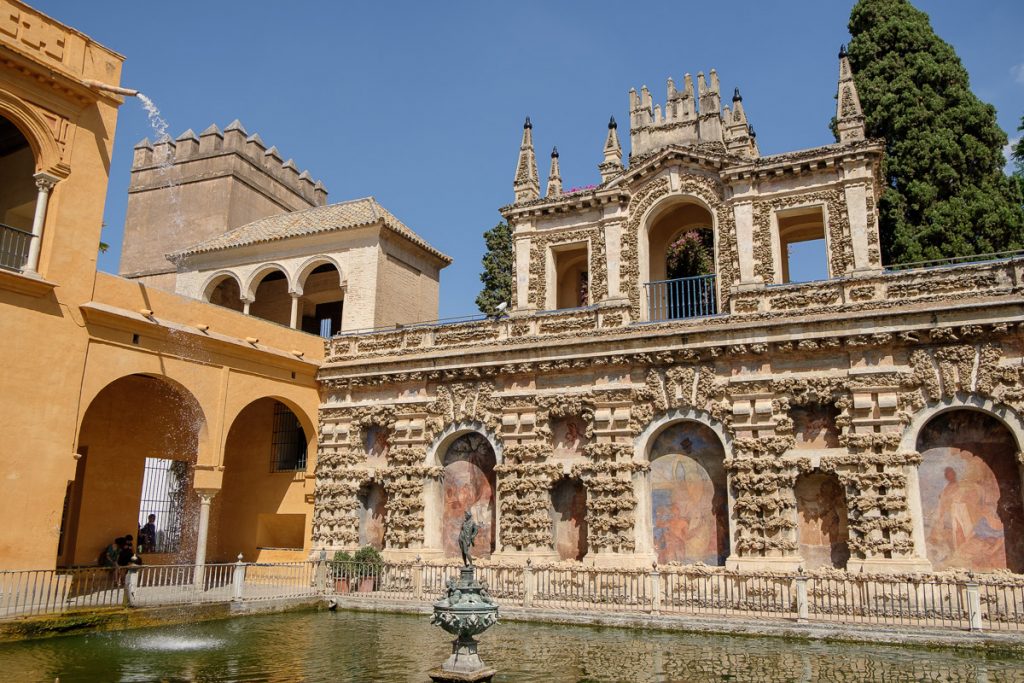 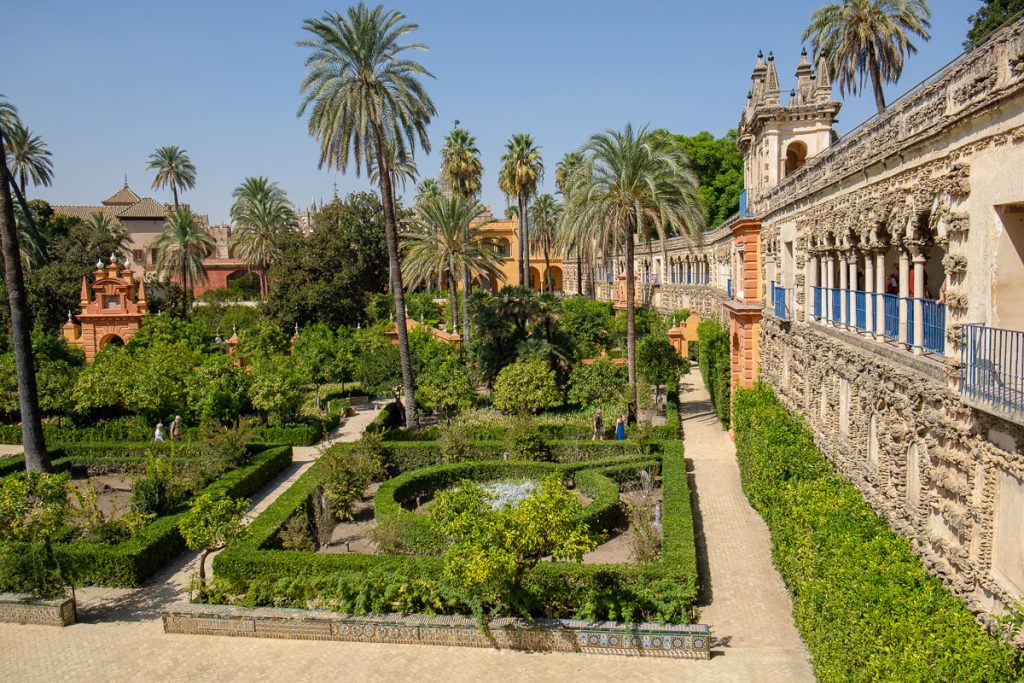 With the tour over I headed back to the hotel.  I had covered a lot of ground in Seville, literally and figuratively.  In the morning I’d take the train to Madrid where I’d stay for the night before getting on my flight to Scotland.  Time is passing fast and it is hard to believe the European part of the journey is coming to conclusion.